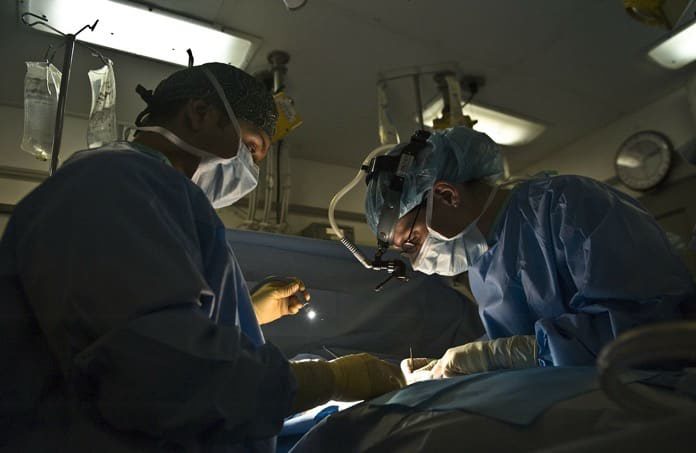 A large clinical trial compared the safety and effectiveness of mesh and sutures for the treatment of adults with an umbilical hernia.

The term umbilical hernia describes the occurrence of a part of the gut bulging through an opening at the level of the belly button. As a newborn baby, the umbilical cord passes through a small gap in the abdomen, which typically closes shortly after birth forming the belly button. Usually, the muscles of the abdomen that lie next to the belly button join together after birth and in doing so close up the gap. In some people, the muscles do not close properly and a gap, albeit covered up with skin, remains.

How do we treat an umbilical hernia?

In children with this condition, most of the time, the umbilical hernia will close up on its own. In adults, if the umbilical hernia remains, it is recommended by doctors to have it closed surgically. The reason for this is to reduce complications that may occur from it getting bigger or becoming painful.

The length of the opening in the abdominal wall that causes the umbilical hernia can vary greatly from less than 1cm to several centimeters.  To treat a large umbilical hernia, surgeons prefer to place a mesh across the opening rather than sutures, or stitches. A mesh is a woven piece of material, similar to clothing fabric, but made from the same material that is used to make sutures. Clinicians have found that a mesh is more effective than sutures at overcoming the forces that work on the abdomen to try and open up the gap again. It is therefore used preferentially over sutures in large openings. However, until a recent study from Europe, it remained unclear whether it is useful to use a mesh in patients with smaller openings.

A research group based in the Netherlands designed a study that could provide high-quality evidence to answer the question of whether mesh placement or sutures are better in smaller hernias and published their findings in The Lancet.

Patients needing surgery for the repair of an umbilical hernia that measured 1-4cm were recruited from hospitals in the Netherlands, Germany, and Italy. In order to provide high-quality evidence, several steps were incorporated into the research study: the allocation of treatment of mesh or suture was made at the time of surgery, by using a random method similar to flipping a coin; the patient, and all other investigators, were not aware until the end of the study which treatment it was they had received.

A high number of patients were enrolled in the study, twelve hospitals participated, and all surgeons placed the sutures or the mesh in the same way. These measures helped reduce any potential bias that could affect the quality of the information from the study. For example, if a patient had a preconceived notion that it would be painful to have a mesh placed within their body wall, they may be more likely to report they were experiencing pain because that is what they believed they should be feeling.

In total, 300 adult patients enrolled in the study, and 284 remained in the study for the full duration of 30 months. The patients who were eligible to enroll included those in whom the hernia was a primary occurrence and had not occurred secondarily to previous surgery, or any other reason. The patients were undergoing surgery for one of several possible reasons: cosmetic reasons, pain, and mechanical interference with daily life from the size of the hernia. The patients were examined at two weeks, and three, 12 and 24-30 months after the surgery. They were assessed for recurrence of the hernia, levels of pain, and any complications from the surgery. The patients also completed questionnaires, which provided details on their quality of life since the surgery.

The results showed that only 4% of patients had a recurrence of the umbilical hernia in the mesh group compared with 12% in the group where sutures were used for the repair. There were no significant differences in pain, complications following surgery, or quality of life between the two groups. The time to place the mesh took on average seven minutes longer than sutures, which is not a clinically relevant time difference.

The authors discuss that previous studies have provided evidence that mesh placement is the treatment of choice for umbilical hernias that are greater than 4cm. However, this is the first study to provide high-quality evidence that mesh placement is also better for smaller hernias between 1cm and 4cm in length. In hernias less than 1cm, the authors discuss that placement of the mesh could be difficult and actually require the hernia to be lengthened to enable the surgeon to seal it properly. One limitation of this study is that it is not known if complications could occur with the mesh after the timeframe of 30 months. The researchers did not extend the study beyond this time because they did not believe that the patients would remain available to provide follow up information.

In conclusion, on the basis of fewer patients having a recurrence of an umbilical hernia following mesh placement compared to sutures, and the lack of any difference with respect to pain, complications, or quality of life, the authors advocate using a mesh repair in all patients with an umbilical hernia at least 1cm.