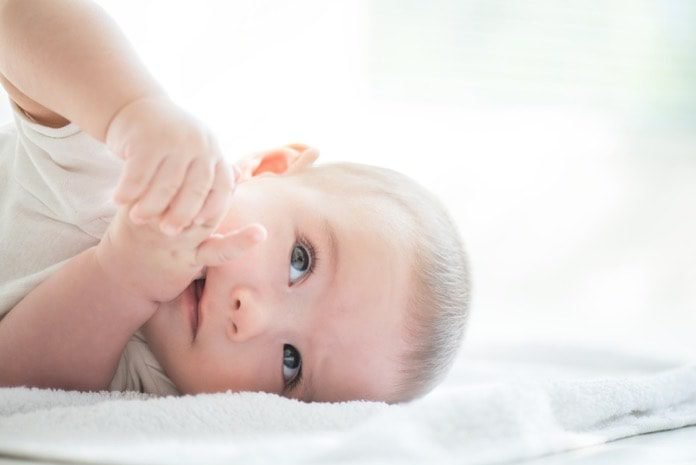 Babies and very young children who experience vomiting and diarrhea a few hours after eating may have a type of food allergy called food protein-induced enterocolitis syndrome, or FPIES. A recent study in the World Allergy Organization Journal summarizes the new guidelines on diagnosing and treating this allergy.

When most kids have allergic reactions to certain food, like peanut butter, signs of the reaction such as wheezing, swelling of the tongue and lips, or the development of hives can be seen right away.  However, when an infant or young child has a rare food allergy called food protein-induced enterocolitis (FPIES), ingesting certain foods leads to delayed symptoms which include vomiting, diarrhea, poor weight gain, and possible dehydration and lethargy. Commonly, FPIES is diagnosed either in retrospect or only after ruling out the other possible gastrointestinal disorders.

Common food triggers are milk, soy, barley, peas, green beans, sweet potatoes, squash, and poultry; although any food protein can be a trigger.  Even though experts do not understand what causes this allergy for some young children, doctors agree that children typically outgrow FPIES by age three or four years.  Although there is no data to specify the prevalence of this condition, doctors have noted an increase in the number of FPIES cases in recent years.

Often underdiagnosed or misdiagnosed, FPIES was not associated with its own diagnostic code until 2015.  The first International Consensus Guidelines for the Diagnosis and Management of Food Protein–induced Enterocolitis Syndrome were published in 2017.  In a recent study published in World Allergy Organization Journal, researchers summarized these new FPIES guidelines which outline the clinical presentation, proposed diagnostic criteria, and recommendations for treatment.

Acute, delayed, and repetitive vomiting is the hallmark of acute FPIES reactions. Patients are often described by parents as looking pale, lethargic, and limp. Diarrhea may occur in a subset of patients. The most concerning possible outcome of an acute FPIES reaction is dehydration, which can lead to hypotension and shock if severe.  Acute FPIES episodes present when the offending food is ingested intermittently or after a period of avoidance. They typically resolve within 24 hours and patients are well in between episodes.

Chronic FPIES is most often seen in infants younger than four months old on cow’s milk or soy formula where the offending food is regularly and repeatedly ingested. Symptoms include chronic or intermittent vomiting, diarrhea, and poor weight gain or failure to thrive.  Patients with chronic FPIES may also experience anemia.

Currently, there is no laboratory test to confirm FPIES.  Rather, a diagnosis is most typically based on the patient experiencing typical signs and symptoms followed by their resolution when the suspected trigger food is avoided.  FPIES differs from viral gastroenteritis in that the symptoms come and go with repeated ingestion of the trigger food.

Anecdotal evidence of the symptoms and their timing following the ingestion food is often adequate to diagnose acute FPIES and identify the food trigger.  For example, stomach upset immediately after the ingestion of a new food may indicate a food allergy, while repetitive vomiting more than two hours afterwards is more indicative of FPIES.  Additionally, while most children with general food allergies typically react to skin prick testing, most FPIES patients have negative results when tested for their trigger foods.  Lastly, sensitization to other foods did not appear to affect the development of tolerance.

Long-term management of FPIES includes the assessment and avoidance of the trigger foods, dietary and nutritional monitoring, and treatment of reactions in cases of accidental ingestion or the development of new trigger foods.  For infants with cow’s milk or soy FPIES, it is recommended that they be fed breastmilk or an extensively hydrolyzed casein formula.

If FPIES is suspected or confirmed, dietary recommendations include starting with fruits and vegetables around six months of age followed by red meat and cereals.  It is also recommended that one food should be introduced at a time with four days in between.  Diets can typically be expanded if infants are tolerating a variety of complementary foods. Lastly, since children often outgrow FPIES, it is recommended that patients be evaluated regularly based on age and food to see if they are still allergic.

Food protein-induced enterocolitis is gaining recognition, however, there continues to be delays in diagnosis, or misdiagnosis, due to the overlap of symptoms with over conditions, the lack of a diagnostic test, and the general perception that some of the common trigger foods are not highly allergenic.  This study concludes that more research into FPIES disease mechanisms and factors influencing differences between populations is needed.