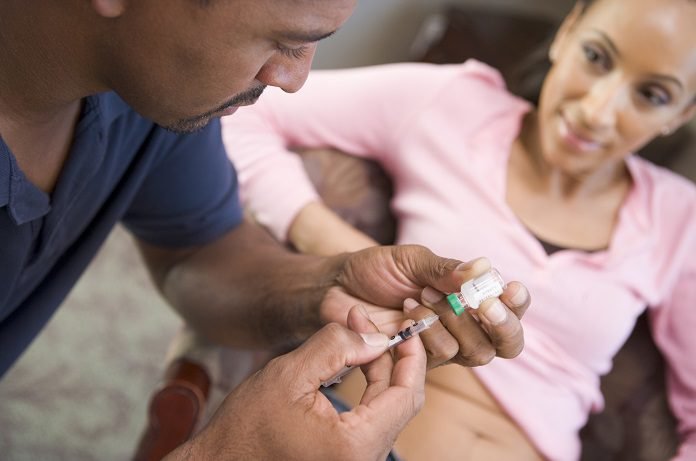 Doctors struggle to find the best way to manage Type 1 diabetes and pregnancy, balancing the needs to the mother with the safety of the foetus.   New research emerges which may shed some light on the best form of insulin to prescribe.

Diabetes in pregnancy is defined as higher than normal blood sugar levels in a pregnant mother after the second trimester. There are two types of diabetes found in pregnant women. Type 1 diabetes is present since birth. If diabetes is influenced because of pregnancy, it is type 2 or gestational diabetes. These conditions are due to an abnormal increase in sugar (glucose) within the maternal blood and must be managed by the intake of glucose-reducing drugs such as insulin.

A child in the womb of the mother is called a foetus. The foetus goes through two major growth processes in the womb of the mother. The first growth process is the development of limbs and lasts for the first trimester. The next growth process is the enlargement of the newly formed organs. This process lasts for the second and third trimester after which the foetus is ready to be delivered. Type 1 diabetes mainly affects the second growth phase, with the excess sugar causing the cells of the foetus to grow abnormally large. The enlarged foetus stretches the womb of the mother and pushes against her other organs, causing damage to itself as well as the mother. Ultimately there are increased risks during delivery due to the increased foetal size and the complication of rupturing the mother’s vaginal passage.

To prevent this situation from happening, insulin is administered during pregnancy to reduce the excess glucose in the blood. However, insulin is found in various formulations.The most commonly used short acting insulin formulations are called NPH (Neutral Protomine Hagedorn), glargine, CSII (Continuous Subcutaneous Insulin Infusion).Since insulin decreases the amount of glucose in the body, excess dosage may lead to abnormally low glucose thus causing a whole new set of complications that include stunted growth. Little is known about the ill effects of the different types of insulin drugs on the development of the child in the womb of the mother during pregnancy.

Chico and colleagues sought to determine the effects of the various insulin drugs on the health of the foetus and determine which drugs were overall safe to use in pregnant women. This work was recently published in the European Journal of Obstetrics and Gynaecology. In this study, a total of 1,534 participants were included who were actively being treated for T1DM (Type 1 Diabetes).  NPH was the insulin of choice for55.6% of the participants, while glargine was used by 23.2% and CSII by 21.1%.

The results demonstrated that the use of glargine was associated with a slightly higher incidence of minor malformations in the foetus compared to other formulations. CSII was found to be associated with miscarriages, preterm birth, and abnormally decreased glucose concentrations in the foetus. Moreover, CSII was also associated with less steady control of the diabetic state in pregnant mothers. Remarkably the authors were also able to identify an association between basal insulin and the birth of a small infant. Previous context on the association between basal insulin and small infant is limited making this finding extremely relevant.

In summary, the results conclude that glargine is preferable to other forms of insulin, including NPH, in terms of patient convenience and positive pregnancy outcomes. Although CSII therapy is independently associated with some adverse outcomes, there still exists a debate on discontinuation of CSII in women who have a need to take CSII before pregnancy. With these results in mind, it would help obstetrician’s in deciding the appropriate treatment for diabetic type 1 women much before their pregnancy and be mindful in general towards young type 1diabetic women who have not yet given birth.