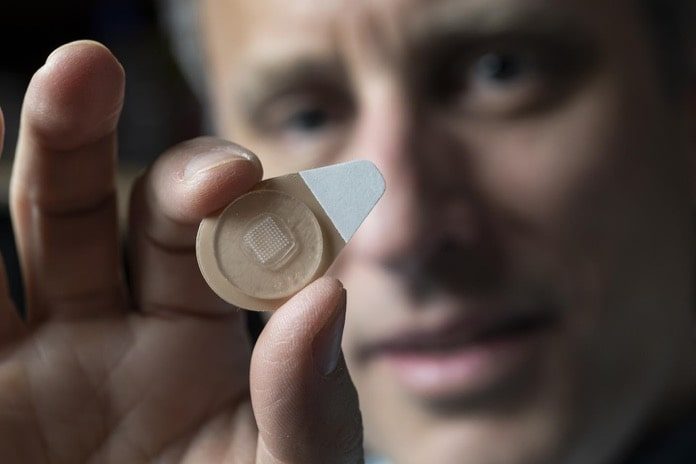 A major reason for unplanned pregnancies is limited access to long-acting and cost-effective contraceptive methods. A microneedle patch for delivering hormones to prevent pregnancy is currently being developed.

An astonishing 85 million pregnancies around the world were unintended in 2012. This has led to millions of abortions. Affected women and their families, as well as society at large, experience the economic and emotional burden that an unplanned pregnancy can cause. Non-hormonal and hormonal contraceptive methods are readily available; however, not all are suitable for all women.

Condoms, diaphragms, and spermicides are effective non-hormonal contraceptive methods but have a very high failure rate because of incorrect use and low acceptance. Hormonal contraceptive methods are safe and effective for pregnancy prevention. Pills, vaginal rings, and patches require frequent administration and some women have difficulty adhering to this type of regimen.

The long-acting contraceptive methods that are currently available (injection and intrauterine devices) require administration by a healthcare professional and are quite expensive. A long-acting, low cost, self-administering contraceptive method can reduce the high rate of unplanned pregnancies across the globe, especially in women with limited access to health care.

Researchers from the School of Chemical and Biomolecular Engineering at the Georgia Institute of Technology in Atlanta, USA have designed a microneedle patch for delivering hormones for pregnancy prevention. By researching the technology used in other long-acting and sustained-release drugs such as Lupron and certain intradermal vaccines, the scientists designed a patch that liberates levonorgestrel through microneedles embedded in the skin. The results of this study were published in Nature Biomedical Engineering.

The hormone used in the design of this novel contraceptive method is levonorgestrel. This progesterone hormone is used in the intrauterine device Mirena and has a long history of effective contraception. To enable a sustained-release into the body, the researchers wrapped the drug in microneedles made of a biodegradable polymer. Polylactic acid and polylactic-co-glycolic acid are two biodegradable polymers that are used in the medicine Lupron Depot. These polymers slowly release drugs and are safely cleared by the body.

Microneedles are microscopic needles that pierce the skin to administer drugs. Microneedles have already been studied in some intradermal vaccine formulations. The microneedles were attached to a patch that can be applied to the skin with sheer force to embed the needles under the skin. Between the microneedles and the patch, an air bubble was included to allow the microneedles to detach from the patch. This allowed women to have the microneedles in place without the physical appearance of a patch on their skin.

Studies on rat tissue showed that the microneedle patch maintained levonorgestrel levels for one month and disappeared after two months. Further studies are required to design a microneedle patch for an adult woman. This design would need a larger hormone dose, more microneedles, and a bigger patch. The small design used on the study rats is a limitation since a larger patch is required for women to achieve the appropriate contraceptive dose. A larger patch may present new challenges for how much force is necessary to apply the patch correctly and embed the microneedles painlessly under the skin.

Novel contraceptive methods are required to control the high rates of unplanned pregnancies worldwide. With a large number of different hormonal and non-hormonal contraceptive methods available unexpected pregnancies account for almost 50% of all pregnancies. A microneedle patch delivery system is a new approach to self-administered contraception using effective technology from other drug formulations. Further studies are required to design an appropriate patch for humans.