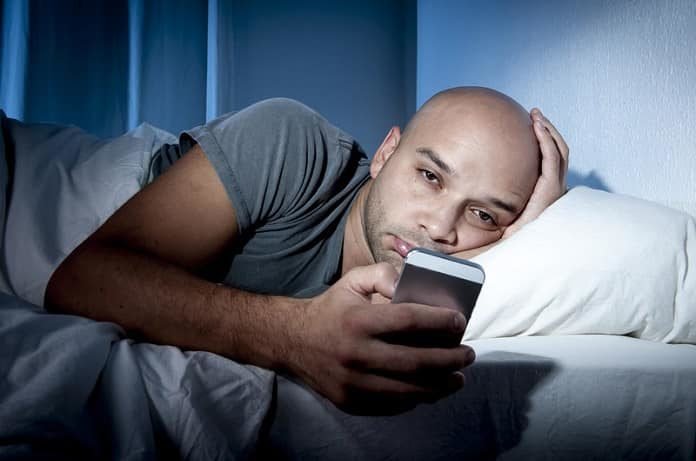 You may want to think twice before reaching for your smartphone at bedtime.  Prolonged smartphone use prior to sleep not only results in altered sleep patterns, but also demonstrates residual effects on autonomic nervous system activity the following morning.

Sleep is an important part of development, especially during the teenage years.  In modern societies, smartphone use has become commonplace.  Many people read books, news, or emails on their smartphone prior to retiring for the night.  However, this may not be a wise idea.  The blue LED light emitted from smartphone screens mimics the morning sunlight, confusing your body’s natural circadian rhythm, possibly making it harder to fall asleep and get the quality sleep that you need.

A new study by Yoko Nose and colleagues in Child’s Nervous System examined the physiological effects of late-night smartphone use on a group of 36 boarding school students in Japan.  Being in a boarding school, the students’ schedules involving mealtime, lights-out, and wake-up times were regimented.  As they were not allowed to have computers or televisions in their dorm rooms, the smartphone was their only form of blue LED light emitting technology.  The coed-students, ranging in age from 15 to 18 years, were divided into two groups matched for age, gender and exercise habits.  One group was allowed greater than 120 minutes of smartphone use each night, and the other group was limited to less than 60 minutes of smartphone use nightly.  Prior to beginning the study, the students underwent a baseline evaluation following an overnight fast, including body temperature, anthropometric measurements, and electrocardiogram. After awakening each morning during the eight-day study, the students’ vital signs and temperatures were reassessed.

It was found that the students in the high-use group went to bed 1 hour later than their lower-use counterparts on both school days and weekends, and woke up 30 minutes later on school days and 2 hours later on weekends.  It was also discovered that students who were allotted greater smartphone use time demonstrated lower autonomic nervous system activity based on heart rate variability calculations, and higher resting heart rates, suggesting that prolonged nighttime smartphone use can cause a delay in the autonomic nervous system’s ability to kick in after waking up.  This implies that smartphone use prior to sleeping can result in sluggishness the subsequent morning.

The setting within a boarding school was both a strength and a weakness of this study.  The structured schedule of the boarding school made for good adherence to the protocol.  A limitation of this study was the obvious selection bias of sampling residential students within the same school.  Future studies could gain greater insight by investigating participant melatonin and cortisol blood concentrations under similar circumstances.