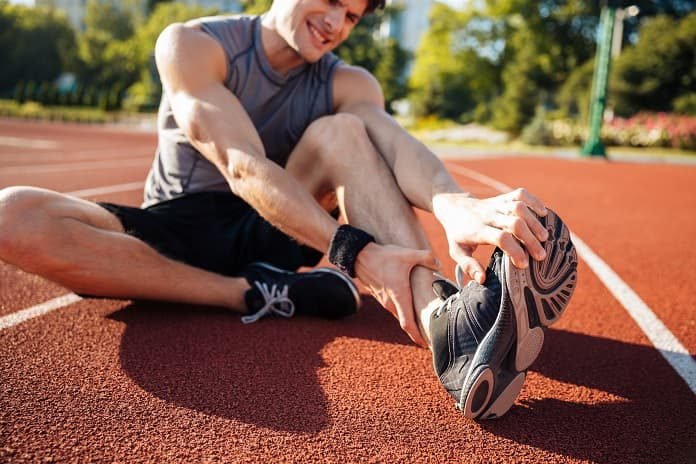 A recent network meta-analysis compared eight different therapies to find the most effective treatment for a sharp pain in heel.

This kind of sharp pain in the heel is caused primarily by acute or chronic inflammation in the thick connective tissue called plantar fascia that supports the arch on the bottom of the feet. Being overweight or standing on your feet for several hours a day, are the most common causes of a sharp pain in heel. The condition is usually diagnosed based on patients’ history and physical findings.

Most people with sharp pain in heel associated with plantar fasciitis recover with the help of traditional treatment options such as rest, arch support, stretching, and night splints. However, severe chronic cases need professional help in the form of drugs, physical therapies, or surgery. Once the treatment starts, the sharp pain in heel may take several months to improve.

The most commonly used therapeutic interventions for the treatment of sharp pain in heel include the use of non-steroidal anti-inflammatory drugs (NSAIDS), ultrasound therapy(US), corticosteroid injections (CS), extra-corporeal shock wave therapy (ECWT), platelet-rich plasma injection (PRP), and autologous whole blood (AWB). In addition, Botulinum Toxin A (BTX-A), considered as an alternative to platelet-rich plasma injections and dry needling (DN) are two more therapies that are being used to treat sharp pain in heel.

The role of therapeutic interventions

Botulinum Toxin A is a neurotoxin that blocks the release of pain mediators, thus alleviating pain. Dry needling is a less invasive process that is being used effectively in relieving sharp pain in heel.

Lastly, electro-corporeal shock wave therapy is a noninvasive procedure that uses ultrasonography for relieving pain. This treatment has proved to be highly effective in treating patients with sharp pain in heel due to plantar fasciitis.

Comparison of the relative efficacy of various treatments

Many studies in the past have compared the effectiveness of treatments but most of these studies produced inconsistent results and did not reach a consensus on the most effective treatment for sharp pain in heel.

A recent study published in the Journal of Cellular Physiologyevaluated the relative effectiveness of eight different treatments for sharp pain in heels caused by planta fasciitis. The team of researchers in Tianjin, China, conducted a network meta-analysis of 41 studies with 2,889 participants. The effectiveness of each treatment was analyzed based on the virtual analog scale which is a psychometric response scale that is used to measure the degree of pain. On a scale of 0 to 10, a value of 0 denotes no pain while 10 denotes unbearable pain.

At two months, the researchers observed a similar trend to the one-month results. The results showed autologous whole blood and corticosteroid injections to be the least effective compared with the placebo while shock wave therapy was the most effective in treating heel pain.

At the end of three months, extra-corporeal shockwave therapy showed the highest overall efficacy for the treatment of sharp pain in heel. Researchers found platelet-rich plasma therapy to be below the optimal effectiveness, whereas all the other therapies showed some degree of effectiveness compared to placebo.

Shockwave therapy and Botox: The most effective long-term treatments

The results of the six-month analysis showed the extra-corporeal shock wave therapy to be the most effective treatment for sharp pain in heel compared with the placebo. The second highest efficacy was achieved by the Botulinum Toxin A treatment. On the other hand, researchers found autologous whole blood and ultrasound therapy to be the least effective.

The comprehensive analysis of the short- and long-term efficacy comparisons revealed that the extra-corporeal shockwave therapy was the most effective among all eight treatments studied for sharp pain in heel caused by plantar fasciitis.

The use of corticosteroids and platelet-rich plasma exhibited average efficacy for the treatment of heel pain. In addition, dry needling and ultrasound therapy showed a good efficacy for short-term treatment but their effectiveness dropped over a long-term.

The researchers observed a high effectiveness of Botulinum Toxin A and regarded it as a promising new therapy. However, in this study, autologous whole blood and NSAIDs were not found to be effective in the treatment of sharp pain in heel.

The use of network meta-analysis that allowed comparison of multiple treatments is the main strength of this study. However, certain limitations of the study include a small number of trials in the meta-analysis, the inclusion of fewer randomized controlled trials, and use of only the virtual analog scale to assess the effectiveness of therapies.

Shockwave therapy may be the best treatment

The results of the study clearly conclude the superiority of extra-corporeal shock wave therapy over the other seven treatments for sharp pain in heel associated with plantar fasciitis. The authors suggest that the shock wave therapy might be the most effective treatment for the sharp pain in heel and the results of this analysis should be considered for the treatment of plantar fasciitis.