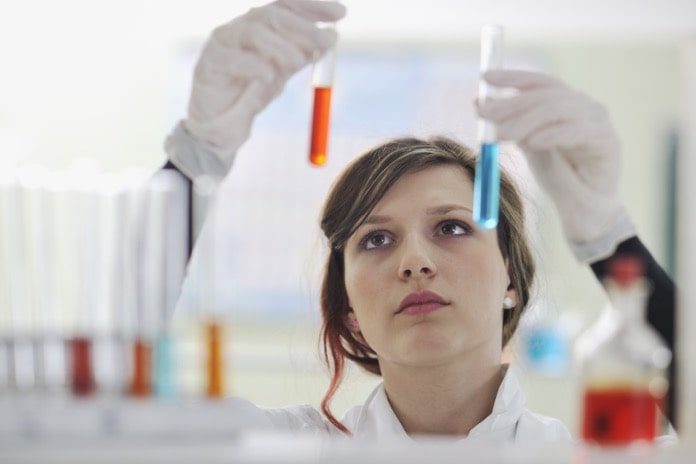 Research shows promise towards understanding the underpinning cellular causes of skin cancer and its potential treatment.

The incidence of skin cancer is rising with cutaneous squamous cell carcinoma (cSCC), a form of non-melanoma skin cancer that is the second most common form of cancer in the United States. Of these, between 2-5% of patients develop metastatic disease where cancer can spread to other parts of the body and is more likely to recur. cSCC affects the outermost layer of the skin and can look like scaly patches, open sores, or warts. They are more likely to develop on areas of skin exposed to UV radiation, which is caused by sun exposure or use of tanning beds. Indoor tanning is thought to contribute to the increase in the incidence of skin cancer.

Development of skin cancer is a complex process and researchers are beginning to untangle the various proteins and their interacting partners that are involved in causing skin cancer. Mouse models allow researchers to chemically induce tumor formation by application of known carcinogens. Using such models, researchers from the American University in Washington DC, USA have elucidated the role of signal pathways involved in cancer development and progression. Dr. Kathleen DeCicco-Skinner and her colleagues recently published their results in January 2019 issue of Oncogenesis that implicates the regulation of the HGF/MET signaling pathway as contributing to skin cancer development and identifies a potential therapeutic drug that can inhibit this pathway.

The Tpl2 gene acts as a strong tumor suppressor

Earlier work by Dr. DeCicco-Skinner and colleagues had shown that mice lacking the Tpl2 gene have significantly higher incidences of skin tumor formation and progression. They also found that fibroblast cells were involved in this process. Further building on their earlier results, the current study shows that Tpl2 acts a strong tumor suppressor.

Skin cells derived from mice without Tpl2 showed an increase in cell growth and in conversion to cancerous cells. The number of mice without Tpl2 devoid that developed tumors upon exposure to a known carcinogen was double that of mice with Tpl2. Additionally, the number of tumors that each mouse developed was significantly higher in the Tpl2-devoid mice. These results point to the powerful tumor suppressor activity of Tpl2.

A certain cellular process affects the activity of Tpl2

Next, the researchers dug deeper into the cellular pathways that aid in the tumor suppressor activity of Tpl2. Their earlier results that implicated fibroblast cells in tumor development pointed them towards the HGF/MET signaling pathway.

HGF (Hepatocyte growth factor) is released by fibroblast cells and is involved in the crosstalk between the primary tumor and the fibroblast cells in the connective framework of tissues.  When the HGF protein binds to a protein called MET, it activates the MET protein, which in turn initiates a cascade of signal pathways involved in cell division, proliferation, scattering, as well as the invasion of the surrounding tissues.

Normally, the MET protein is activated during embryo development where it is involved in formation of different tissues. However, cancer cells hijack this activity of MET to invade surrounding tissue and causing the spread of cancer.

Novartis has developed a drug that inhibits the activity of MET

The HGF/MET pair of proteins has been implicated in many cancers and is thus a target for many cancer-fighting drugs. Novartis has developed one such drug called capmatinib that inhibits the activity of the MET protein. It is currently being studied in various clinical trials for various cancers including lung, kidney, and liver cancer.

The current study showed that treatment with capmatinib reduced the number of tumors by 60% in the Tpl2 devoid mice. Strikingly, none of the Tpl2 mice fed with capmatinib developed any malignant conversion of the benign to invasive tumors. These results strongly point to the involvement of the MET signaling pathway in the activity of Tpl2 as a tumor suppressor. Additional experiments also showed that the Tpl2 devoid mice were immune to the effects of a potent growth inhibitor protein, TGFβ.

Mouse models remain a viable model system to study cancer. However, findings from studies in mice need to be rigorously vetted and validated in clinical trials. In the current study, the researchers noted that there were no untoward health effects such as weight loss associated with the capmatinib treatment. However, studies in humans need to be carried out to ensure the safety and efficacy of capmatinib.

The results are a significant step forward in understanding skin cancer but additional pieces of the puzzle remain, such as the reasons behind the increase in activation of the HGF/MEK pathway in absence of Tpl2. The findings in this study underscore the complexity of cellular processes involved in cancer development and the need for research that uncovers these processes.

Dr. DeCicco-Skinner, co-author of the study, noted in a recent press release, “[Treatment with medicinal cocktails] can be like the game of Whac-A-Mole, in that when one protein gets knocked down, sometimes compensation occurs and another pops up. We need to understand the interactions between different proteins so we can identify how to most effectively target the development and spread of cancers such as squamous cell carcinoma.”