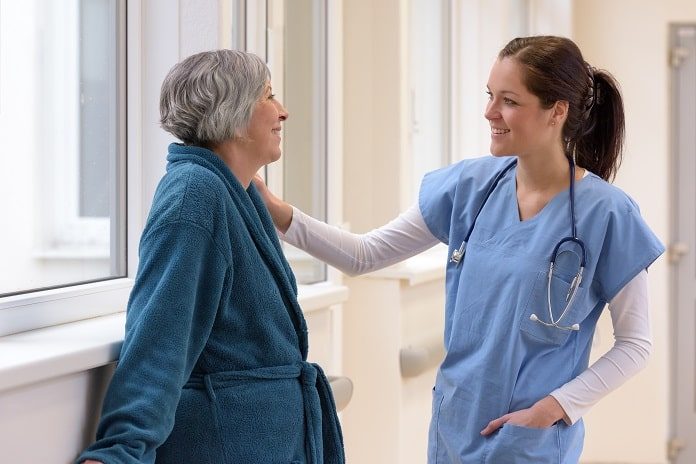 Researchers uncover an easy-to-measure and reliable predictor of survival and unplanned hospitalizations amongst patients suffering from blood cancer.

This quick and easy measure is gait speed (the speed with patients walk). Gait speed has been recommended as “a practical assessment of functional and physical performance in older patients with cancer.” A second measure that is also being used to measure physical function is grip strength. Both these measures indicate frailty in patients. Frailty has been linked to increased chemotherapy-related toxicity, poorer response to therapy, and higher rates of mortality in patients with blood cancers.

Researchers at Dana-Farber Cancer Institute and the VA Boston Healthcare system report that for every 0.1m/s decrease in walking speed, the risk of dying, unexpected hospitalization, or emergency-room visit increased by 22%, 33%, and 34%, respectively. The link was strongest amongst patients with non-Hodgkin lymphoma. The results of this study were published in the journal, Blood and strongly suggest that measurements of gait speed and grip strength be included as a routine part of medical assessments for older patients suffering from blood cancer.

This study included 448 patients with blood cancer and with ages 75 years or older with an average age of 79.7 years. The patients completed multiple tests for cognition, frailty, gait speed and grip strength. To measure gait speed, the patients were asked to walk at a normal pace for four meters and their speed was measured using a stopwatch.  Additionally, patients with very good or excellent physician-reported performance status were divided into three groups based on their gait speed- frail, pre-frail, or robust. A subset of 314 patients was followed for an average of 13.8 months following their first consultation. Nearly 20% of patients in this subset had an unplanned hospital stay and 16.8% visited the emergency department. This is significant as earlier studies have shown that hospitalization itself has been linked to disability and death in the future among older patients, especially so with frail patients. As explained by the senior author of the study, Dr. Driver, “Our study shows that performance status alone may not be good enough. […] The standard of care is to stratify treatments based on patients’ performance status, and while this works well in younger people, these results show that in older people we need to do more.”

The researchers also measured grip strength in all patients and while it strongly predicted survival rates, it was not linked to hospitalization or emergency room visits. It could be used as an alternative measure for patients who are unable to walk.

The high predictive power of gait speed, regardless of cancer aggressiveness, cancer types and even in patients with good physician reported performance status, shown in this study along with the ease of carrying out the test suggest that it should be included in routine clinical assessments. As Dr. Driver explains,” There is an unmet need for brief screening tests for frailty that can easily fit into clinic workflow and predict important clinical outcomes. This test can be done in less than a minute and takes no longer than measuring blood pressure or other vital signs. Based on our findings, it is as good as other commonly used methods that take considerably more time and resources and may not be practical for many oncology clinics.”

This test is a measure of multiple bodily systems involved in a seemingly simple act of walking that includes the musculoskeletal, cardiovascular, and nervous systems. Gait speed is already adopted as a measure of physical function in other fields. The results shown in this study support its use as a “functional” vital sign in patients with blood cancer as well. Further studies could be carried out to assess if interventions such as physical therapy, walking aids, and avoiding sedating medications could improve gait speed and the effects of the increase in gait speed on survival rates.