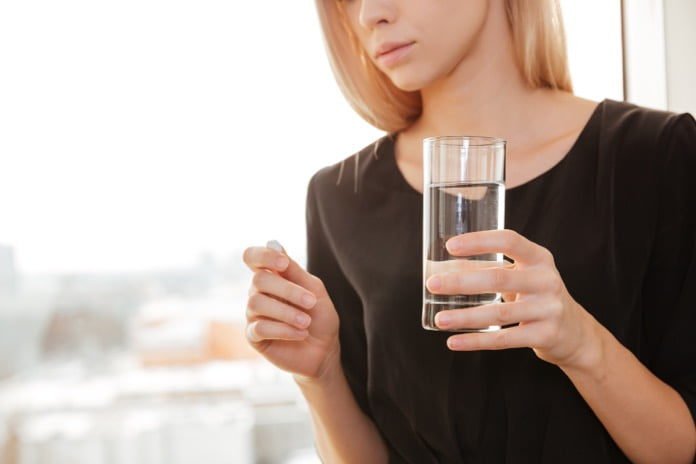 Dienogest has been extensively investigated as a treatment for endometriosis. A new study evaluates its efficacy in treating symptomatic adenomyosis.

Adenomyosis is a condition that involves the encroachment, or movement, of endometrial tissue lining the uterus. Adenomyosis differs from endometriosis in that the endometrial tissue “pushes” into the muscles of the uterus rather than becoming implanted outside the uterus. This makes the uterine walls grow thick and can lead to heavy or longer-than-usual menstrual bleeding. Individuals with adenomyosis often experience intense pain during their period, and sometimes during intercourse as well.

The exact cause of adenomyosis is unknown but there are several theories:

Although individuals with adenomyosis may not require medical treatment, those with more severe symptoms may be instructed to take anti-inflammatory medications, such as ibuprofen, beginning three days before their period. These medications can reduce blood flow during periods as well as relieve cramp pain.

Since adenomyosis is associated with estrogen, women may also be prescribed progestin-only oral contraceptives to help control the increased estrogen levels contributing to symptom severity.  In severe cases, or in women who don’t plan on having more children, a hysterectomy may be recommended.  However, adenomyosis typically resolves itself after menopause.

In a recent study published in Fertility and Sterility, researchers from Tokyo, Japan studied the safety and efficacy of dienogest (DNG), a synthetic progestin used in oral contraceptives since 1995, as a treatment for symptomatic adenomyosis.

In this multi-center, randomized, double-blind, placebo-controlled study, 67 women with adenomyosis received either 2 mg/day of DNG or a placebo for a period of 16 weeks.  Although almost all the women in the DNG treatment group experienced some irregular uterine bleeding during the study (97% compared to 39% in the control group), the number of days with heavy bleeding was reduced.  The women receiving DNG also rated their pain as significantly less than did the women in the control group. Lastly, there was no evidence of uterine enlargement or severe anemia in women in the DNG treatment group.

These results suggest that DNG is an effective and well-tolerated treatment option for women with symptomatic adenomyosis.  Due to the increased risk for severe irregular uterine bleeding that this study found was associated with DNG, this hormonal treatment may not be indicated for adenomyosis patients with severe uterine enlargement or severe anemia.

One limitation of this study was the fact that laparoscopy was not used to definitively rule out a diagnosis of endometriosis.  However, image diagnosis using transvaginal sonography and MRI were performed by a gynecologist with ample experience, and as such, the researchers were confident in the diagnoses of adenomyosis.  Another limitation of this study was that the results were limited to a 16-week treatment period.  Since adenomyosis does not resolve until menopause, data on a five or ten year treatment period will be necessary to determine the long-term efficacy and safety of DNG.