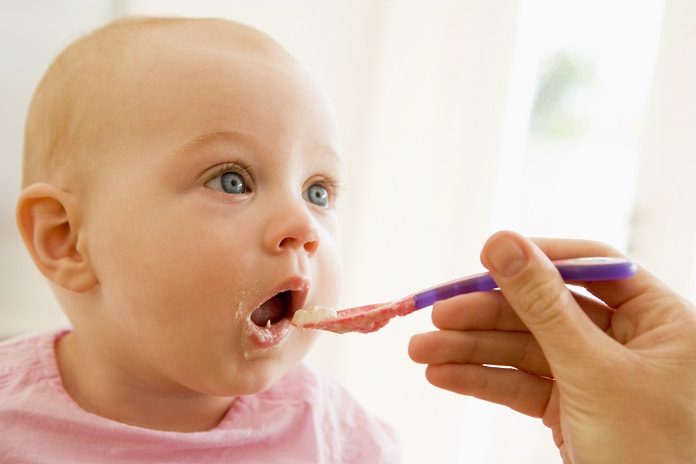 A recent study carried out by researchers at the Johns Hopkins Bloomberg School of Public Health examined the outcomes of standard feeding guides for commencing solid food in infants.

Current guides for starting infants on solid foods are produced by infant formula makers, children’s hospitals, and infant health experts. These guides have been produced with the intention to help mothers and caregivers when starting infants on solid food after being fed solely on breastmilk and/or formula milk. This recent study, published in the American Journal of Preventative Medicine, found that the guidance provided from four feeding guides when used between the ages of 6-12 months led to overfeeding and therefore overweight infants.

A computer simulation model was used in this study for ethical reasons, as infants would have been placed at risk of being over or underfed. This model was validated by the researchers by feeding the virtual infants as per standard reference guide on infant energy needs. The results of simulated growth were in line with growth curves published by the World Health Organization.

For the study, feeding was simulated using, the computer-simulated infant model, according to the four feeding guides. The four feeding guides used in this study were those created and published by the Children’s Hospital of Philadelphia, Johns Hopkins Medical Institution, Enfamil, and Similac. Each guide was given four simulation runs, with each modeled by 1,000 infants assuming they received standard breastmilk intake and solid food intake as per the guide. However, varying rules were used regarding caregiver adjustments to solid food portions to mimic a real-life scenario. For example, mothers usually adjust their feeding quantities based on their infant’s weight gain or weight loss. Simulated growth and weight, as well as metabolic rates and activity levels, were recorded for these computer-simulated infants between the ages of 6-12 months.

The results of this study demonstrated that following each guide for a few months would increase the BMI of each virtual infant so that they were categorized as being overweight. This result remained even in the infants that were fed solid food portions that were kept to the lowest 25 percent of the guides’ recommended range.

The researchers of this study propose that current standard solid food guidelines might have been derived from the best available evidence at the time, however that evidence is lacking and further research is needed to develop new and better guidelines.