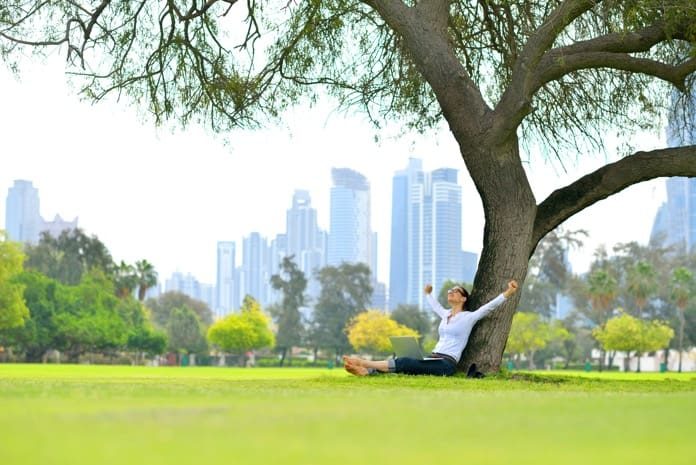 In today’s rapidly developing world, there is increasingly less green space as more buildings are being built and ecosystems are being destroyed. Parks are a great way to preserve plant and animal life in urban communities, which is highly beneficial to the environment.  Unfortunately, urban parks are often not seen as a priority and get demolished in order to make room for new infrastructure.

In addition to helping the planet thrive, urban parks have many benefits for our overall well-being.  They provide a place where people can meet and host events, which enforces a positive sense of community in the area.  They also are a space where people can walk around or exercise, and this helps people who do not have access to a gym to get necessary physical activity.  Finally, they encourage people to get outside, which helps prevent vitamin D deficiencies by increasing exposure to sunshine.

All of these factors play a role in improving overall mood and happiness in people who visit urban parks.  A recent United States study published in the International Journal of Environmental Health Research examined the effects of visiting urban parks on subjective emotional well-being.

For the study, 98 adults over the age of 17 who planned on staying in the park for less than three hours participated, but data from only 94 participants were recorded because two participants performed the study twice to prevent altered results.

The study took place at three different parks in Alabama, United States: Overton Park, which has a large area for picnics, a pavilion for events, tennis and basketball courts, and a children’s playground; Jemison Park, which has a 1.6km trail; and Cahaba River Walk, which has a nature path along the Cahaba River with easy access to the river as well as a pavilion and exercise equipment.  The study ran from late May to early December of 2016, so responses were recorded at varying seasons and weather.

Researchers performed a two-part questionnaire at the three parks.  The first part consisted of asking questions about the background information of the participant, asking their reason for visiting the park and giving them an ActiGraph accelerometer to measure physical activity during their visit.  The second part of the question asked questions about their satisfaction of life and their level of happiness.

Increase in happiness and mental well-being after park visits

Overall, park visitors described an increase in happiness and improvement in mental well-being immediately following their visit.  The most drastic improvement was observed when participants spent over 20 minutes at the park.  The improvement in subjective emotional well-being was not correlated with the level of exercise, so people who cannot perform vigorous exercise due to age or disability can still reap the benefits.

These findings suggest that visiting urban parks can have positive effects on emotional well-being, and visitors do not have to be working out in order to benefit from park visits. However, more research is needed to determine if the effects are causal, as well as find other benefits of urban parks on individuals and society.

For the time being, it is safe to say that parks should be kept for many reasons because they encourage more outdoor time and preserving the environment, which is necessary in today’s developing world.