Diabetes is a chronic health condition. According to the World Health Organization, the number of people diagnosed with diabetes has more than doubled in the past 40 years.1

After we eat, food is broken down into sugar and taken up through the blood. Insulin is needed to take up glucose (sugar) from the blood.2 Without proper functioning insulin, too much sugar stays in the blood and causes serious health complications.

Managing diabetes is important so that it doesn’t lead to more complicated illnesses, such as heart disease and nerve damage.

Cinnamon is a popular spice used world-wide. Cinnamon comes from the bark of the Cinnamomum tree.3 It is used to flavor dishes and preserve food, but throughout history it has serves as a medicine as well. Cinnamon has provided aid in treating different ailments including respiratory and digestive issues.3

The health effects of cinnamon come from its various parts, either the bark, leaves, or root.4 There are currently two different types of cinnamon available for consumers: Ceylon or cassia.

Cassia cinnamon is the cinnamon most commonly seen in food products.4 Cassia must be used with caution, because some research has found it to contain coumarin (a substance found in plants).4 Too much coumarin can become toxic to the liver.5

Ceylon cinnamon is known as “true cinnamon” and it is more expensive to obtain.4 It contains lower amounts of coumarin and is therefore, safer for consumption.5

So, how is cinnamon good for diabetics?

The active ingredient in cinnamon, MHCP, can lower blood glucose levels by mimicking what insulin does.6 Studies have found that it can target the same parts of the cell as insulin. By increasing the insulin response, cinnamon can decrease fasting blood sugar levels and improve diabetes symptoms.6

The cholesterol-regulating properties of cinnamon make it a great spice to consume for people with type 1 or 2 diabetes.

In type 2 diabetics, one study discovered that having 1, 3, or 6 grams of cinnamon was able to decrease “bad” and overall cholesterol levels.6

By regulating cholesterol, which is usually high in diabetics, cinnamon consumption can prevent plaque buildup in blood vessels of the heart and prevent heart complications.6

Cinnamon can help lower blood pressure, strengthen heart health and improve some of the cardiovascular complications seen in diabetic patient.4

Research has shown that regularly consuming cinnamon as part of the diet can decrease oxidative stress in people with prediabetes.4 A large population study found that taking 500mg of a cinnamon extract supplement for 12 weeks, was able to decrease harmful free radicals by about 14%.4

Cinnamon has powerful anti-microbial benefits. Many experiments have shown that it can fight different bacteria, including tuberculosis, some fungus, and the human rotovirus.4

Cinnamon’s anti-microbial properties can also protect against parasites. A study in children found that a ten-day use of cinnamon bark was able to protect two infants from Salmonella.4

Since people with diabetes are susceptible to bacterial infections, cinnamon may help in fighting illnesses.

There is still no general agreement on the exact amount of cinnamon that should be added into the diet.

Since cinnamon lowers the amount of sugar in the blood, it is important to be careful when mixing it with other medications. Having too low blood glucose levels (hypoglycemia) can be dangerous and lead to problems, such as heart complications.4

Cinnamon has incredible health benefits. Including this spice in the diet may be beneficial in diabetes care people with prediabetes or diabetes. Talk to a healthcare professional to find out if cinnamon is right for you. 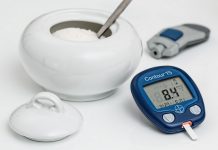 How does Metamucil work?