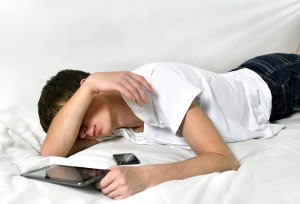 Wearing eyewear that protect against blue light from portable light-emitting diode (LED) devices before going to bed could improve sleep quality, according to a new study.

The increased use of portable LED devices such as smartphones and tablets has been linked to changes in the circadian rhythm and sleep disorders. LED devices emit high intensity blue light and excessive exposure to blue light at night affects the level of melatonin in the body, the hormone that regulates circadian rhythm. A recent study published in Chronobiology International tested the effect of using blue-light shield eyewear while using portable LED devices on sleep quality.

The study enrolled 12 healthy adults aged 24-40 years. Each participant wore control or blue-light shield eyeglasses while using portable LED devices 2 hours before going to sleep. LED devices included tablets and smartphones from either Apple Inc. or Arrows (Japan). The control eyewear was gray-tinted and transmitted 93.2% blue light while the blue-light shield glasses were brown-tinted and transmitted 43.8% blue light. After two weeks, control subjects were switched to the blue-light blocking glasses and vice versa. Participants were asked about sleep and vision quality after using both types of eyewear. The sleep/wake cycles of each subject was monitored and the amount of melatonin was measured from urine samples.

Although the study size was small and should be extended to a larger population size, the results of the study were consistent with previous research on the effect of blue light and LED devices on the sleep quality of teenagers. This study concluded that the use of functional eyewear that protect against blue light from portable LED devices could reduce eye strain and improve sleep quality.