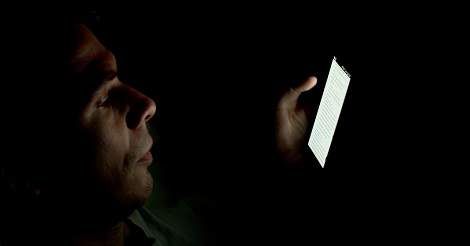 This letter to the editor describes two cases and a study involving temporary smart phone blindness that resulted when individuals viewed their smart phones with one eye, leaving their other eye with little time to adjust to changes in light or darkness.

In this recently published article in the New England Journal of Medicine, the authors present two cases of transient monocular vision loss (temporary vision loss in one eye). Transient monocular vision loss is rare. In the first case, a 22-year old woman claimed that she had experienced impaired vision in the right eye at night over several months. The woman underwent a series of diagnostic tests and examinations including cardiovascular examinations and echocardiography (the use of sound waves to create images of the heart) among others. In the second case, the authors describe a 40-year old woman who stated she had experienced monocular visual impairment after waking up in the past six months, which lasted up to 15 minutes.

One or two main results: Interestingly enough, upon further questioning the patients both revealed that their symptoms had occurred after viewing a smart phone screen for several minutes while in bed in the dark. Moreover, both patients also added that their symptoms were experienced in the eye that was contralateral (the side opposite to which the patient was lying down on). Experts suspect this transient monocular vision loss occurred because one eye (the eye viewing the smart phone screen) was becoming adapted to light, while the other eye blocked by the pillow was becoming adapted to the dark. The authors also briefly describe a study where two authors monocularly (with one eye) viewed a smart phone screen at arm’s length and measured visual sensitivity and recovery time. In that study the authors’ visual sensitivity was decreased following smartphone viewing with one eye, and took several minutes to regain.

Most individuals view their smart phones with both eyes, although individuals do often view their smart phones while lying down and while one eye is not exposed to light. As the increase in smart phone usage rises, cases similar to the ones detailed above are likely to increase in frequency. The above described cases highlight how detailed questioning regarding a patient’s history involving smart phones and a deeper understanding of retinal physiology can reassure patients, doctors, and reduce the likelihood of unnecessary anxiety and expensive diagnostic investigations.