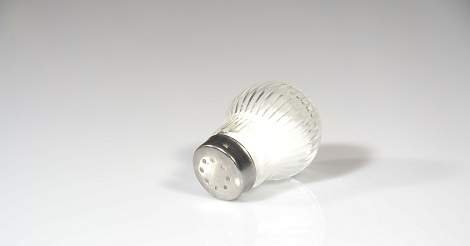 The FDA has released a draft of new proposed guidelines to reduce sodium consumption in the US by a third. These guidelines will span 10 years and will attempt to reduce average sodium intake from 3400mg/day to 2300mg/day.

The average sodium intake in the United States today is 3400mg/day, an amount well above the recommended intake for the general population. This is a problem that is hard to rectify for the average consumer, as the majority of this sodium comes from processed and prepared foods. Overconsumption of sodium can lead to a number of health concerns, including heart disease and stroke.

Recently, in the British Medical Journal, the news that the United States was seeking to reduce sodium consumption by one third was published. The US Food and Drug Administration (FDA) released a draft of the proposed guidelines. The methodology to be implemented would span over a decade, and involve changes to the processing of food products and packaged foods, and the restaurant industry. As many Americans know, they need to consume less sodium, and reducing the amount in processed foods will give them more control over their diets.

There are two phases to the proposal: a short term phase that will last two years, and a long term phase which will span 10 years to reduce the level of salt to 2300mg/day. The rationale for the longer phase is that the gradual reduction will give both companies the time needed to change their processing protocols and product, and give consumers time to adjust to the changes in salty flavours.

There have been mixed reactions to these government guidelines by the food industry. Nestlé, which is the largest food company in the world, and Mars, another industry giant, both have embraced the proposed changes and were supportive of the FDA’s implementation. Other groups, such as the Salt Institute, disagree with the FDA, stating that there is no reason for population-wide salt reduction. There are critics that argue that the evidence supporting sodium reduction is not significant. A similar trial in the United Kingdom took place from 2003-2011, reducing sodium by 15%. The results of this were decreased population blood pressure, and a reduction in the number of deaths from ischemic heart disease and stroke by approximately 40%. The United States is hoping to see similar benefits, and is estimating that a reduction of sodium by 1200mg/day could prevent up to 500,000 deaths, and save an estimated $100 billion USD in healthcare costs over the next 10 years.