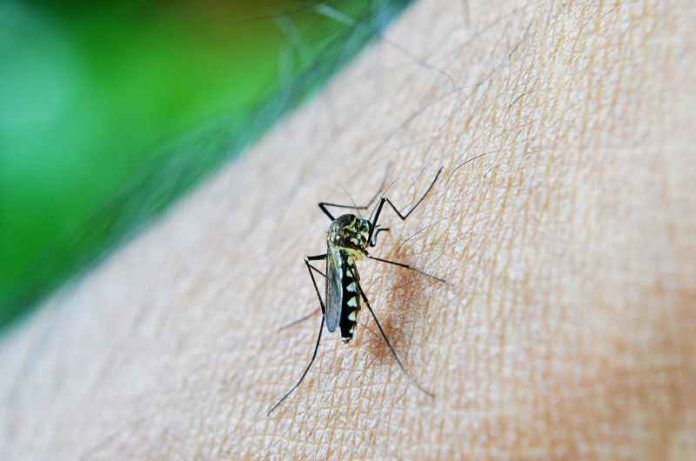 A 2016 research group has developed an ultra-long-lasting drug delivery method for the treatment of malaria. The ingestible star-shaped apparatus was found to maintain therapeutically relevant levels of ivermectin – a drug which targets malaria-transmitting mosquitoes – in the blood for 14 days without damaging the digestive tract or impeding digestion.

A number of strategies have been employed to combat malaria, a life-threatening illness transmitted through the blood by Anopheles mosquitoes. One such strategy is mass drug administration, in which medications which prevent or treat malaria are distributed to at-risk populations, limiting the spread of the disease by targeting the mosquitoes which spread it or the parasites (Plasmodium falciparum) which cause it. Noncompliance – no longer taking the drug or no longer adhering to the prescribed regimen – and the costs and logistics associated with maintaining sufficient access to the prescribed medications, remain significant obstacles to the effectiveness of mass drug administration programs. The use of ultra-long-lasting therapies, which do not need to be retaken very frequently, may help curtail losses due to noncompliance, logistics, and expenses, improving the efficacy of such programs.

A 2016 paper published in Science Translational Medicine details the findings of a research group developing an ultra-long-lasting oral method of drug delivery for ivermectin, an antimalarial drug which targets Anopheles mosquitoes. Design considerations included the shape and size of the ingestible agent, its ability to remain in the stomach without causing injury or preventing the digestion of food, hold large quantities of ivermectin, predictably administer the drug over a long time period, protect the drug from breaking down within the stomach, and to break apart as necessary to avoid damaging the digestive tract.

To permit the ingestible agents’ entry into the stomach, connected units were designed to be delivered by a gelatin capsule and then unfold 5 to 30 minutes after release. Based on the findings of previous research in large mammals, a size of 2 cm for the unfolded agent was chosen in order to prevent passage through the opening from the stomach into the small intestine. The agents were composed of a heat-treated form of poly(ε-caprolactone) (PCL), commonly used in drug delivery systems for its durability. This material was also determined to retain most of its unfolding ability – 80% when stored at 22°C and 85% when stored at 4°C – after 1 month of storage. Individual units were linked by films designed to remain stable in the highly acidic environment of the stomach but dissolve when exposed to the low acidity of the small intestine, allowing the agent to break apart and avoid injuring or obstructing the remainder of the digestive tract. Of the several agent shapes tested in fifteen 30-50 kg Yorkshire pigs – 107 capsules in all, administered on 35 occasions – a six-pointed star design was found to be most effective at unfolding fully in the desired time frame. Ingestible agents remained in the stomach for up to 10 days, determined by x-ray analysis and by endoscope. No injury to the digestive tract was observed and ingestible agents did not impede digestion.

To determine the ability of the agent to deliver the drug in a controlled manner, PCL-coated and uncoated ivermectin – formulations of which consisted of 70% and 15%, 70% and 20%, or 60% and 20% PCL and ivermectin by weight, respectively – were exposed to artificial gastric and intestinal fluids in the laboratory. To simulate the forces produced by stomach contractions these suspensions were placed in a shaking incubator at 150 rpm. Compared to uncoated ivermectin, which degraded substantially after 3 days, coated ivermectin remained stable for up to 14.

Drug-equipped agents were then tested in the Yorkshire pigs. Capsules containing 15-20% ivermectin by weight were administered using an endoscope. To better observe drug release from the individual units, agents were not linked in a star design. No injury to the stomach was observed and the individual units moved freely about the stomach without impeding digestion. Blood samples were collected at 0, 1, 2, 6, and 24 hours, and every 24 thereafter until retrieval at 14 days. The target blood concentration of ivermectin – sufficient to reduce malaria transmission for 10 or more days – was 8-40 ng/mL. Ivermectin was found to remain more than 96% intact. Furthermore, blood concentrations of more than 8 ng/mL on average were observed at 14 days for all capsules.

Mathematical models were employed to estimate the effect such an ultra-long-lasting ivermectin formulation could have when used alongside Eurartesim, a drug which targets the malaria parasite Plasmodium falciparum, for multiple rounds of mass drug administration. For the two scenarios tested – administration during three annual dry seasons in southern Zambia and administration during three-year-long programs in the Democratic Republic of Congo, both covering 60% of the populations – the seasonal Zambian model suggested a greater likelihood of local malaria elimination for programs employing 14-day ivermectin vs. the traditional 3-day ivermectin, though the non-seasonal Democratic Republic of Congo setting saw no benefit.

Overall, the researchers’ findings suggest use of this oral, ultra-long-lasting drug delivery method with ivermectin may be of benefit to anti-malarial mass drug administration programs, especially those in countries with seasonal malaria outbreaks. Furthermore, the ingestible agents developed were well tolerated in pigs, did not impede digestion, and produced no adverse side effects. Research conducted in non-human primates and eventually humans will be required to improve upon the design and determine the ivermectin concentrations of most benefit to mass drug administration programs. As pigs have slower gastric emptying and intestinal transit time than humans, effective ivermectin concentrations may not persist for the 10-14 days observed in this study.