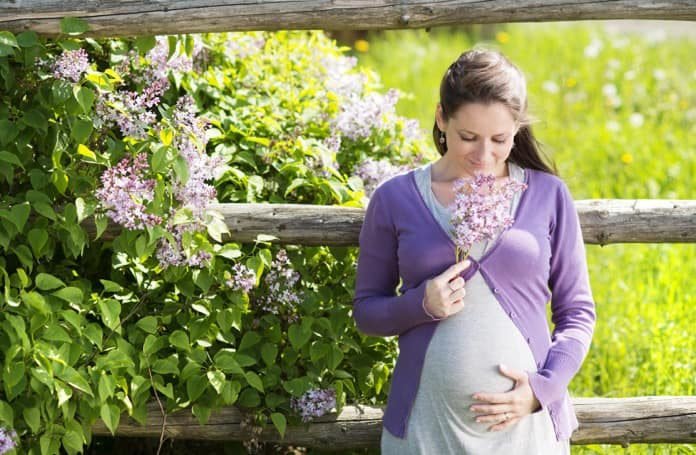 Pregnancy can significantly impact the thyroid gland, and the impact of changes in thyroid hormone levels during pregnancy may be linked to a risk of developing gestational diabetes.

It is relatively common for pregnant women to have abnormalities in thyroid function due to pregnancy. This can lead to pregnancy complications, such as premature delivery, and adverse health outcomes for the baby.

How does pregnancy affect the thyroid gland?

During pregnancy, the thyroid gland can increase in size by up to 40%, which results in changes in the production of the thyroid hormones thyroxine (T4), triiodothyronine (T3), and thyroid stimulating hormone (TSH).

T3 is the active hormone molecule in the body and T4 is a precursor that gets converted to T3 in the body, either by enzymes or the thyroid gland itself. Thyroid hormones play an important role in many of the body’s functioning, including how it handles and processes glucose, which suggests that they may play a role in the development of gestational diabetes. Despite these known thyroid changes, there are no clear recommendations around the routine screening or treatment of thyroid dysfunctions in pregnancy.

How do thyroid changes affect women’s risks for gestational diabetes?

To provide more insight into the effects of thyroid changes on gestational diabetes risk, researchers in the United States studied thyroid hormone levels and their ratios, and their association to gestational diabetes. Their results were published in The Journal of Clinical Endocrinology & Metabolism.

The researchers conducted a case-control study that evaluated the medical records of pregnant women from 12 U.S. clinical centres. They determined gestational diabetes status based on medical records, and thyroid hormone data were obtained from the blood samples collected and documented over the course of pregnancy.

Since thyroid hormone levels can fluctuate over the course of pregnancy, the study also assessed associations between the first and second trimester separately, in addition to the overall trend of thyroid hormones over an entire pregnancy.

The study found that T3 levels and the ratio of T3 to T4 levels were significantly higher at the first and second trimester of pregnancy in women who would later go on to be diagnosed with gestational diabetes. This demonstrates a significant and positive association between the risk of gestational diabetes and the levels of T3 and the ratio of T3 to T4 at both trimesters.

They also observed TSH levels to drastically increase in the beginning before levelling off, however, TSH was not found to have any association with gestational diabetes at either the first or second trimester. Further, hypothyroidism (where thyroid hormone levels are below the normal range) was not shown to be linked to gestational diabetes in both trimesters.

The study’s measurement of different thyroid function markers throughout pregnancy allowed the researchers to examine potential trimester-specific associations, and the large study population representative of four major ethnic groups means the results can be applied to a broad group of individuals.

In summary, the overall findings contribute to the body of evidence that thyroid function abnormalities are linked to an increased risk of gestational diabetes and its related adverse health effects. The study suggests that there may be a potential benefit to routine screening of thyroid function among pregnant women.