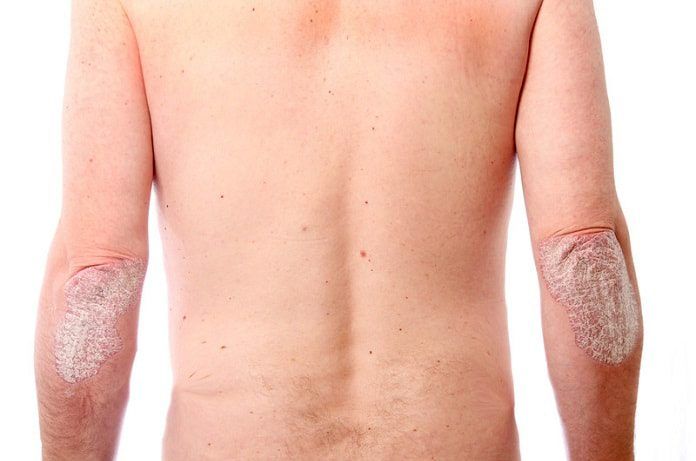 A currently approved antibody for the treatment of plaque psoriasis, ixekizumab, targets a cytokine that may also play a role in the pathogenesis of inflammatory bowel disease. This has led to concerns that ixekizumab increases the occurrence of inflammatory bowel disease in patients with psoriasis.  A recent study published in the American Journal of Dermatology have now put those concerns to rest.

Plaque psoriasis is an inflammatory skin disorder, characterized by the appearance of raised red scales, which are often itchy and painful. What’s worse is that psoriasis has a significant genetic overlap with inflammatory bowel disease (IBD), and patients often develop IBD as a co-morbidity. Crohn’s disease and ulcerative colitis are the two most common manifestations of IBD, characterized by chronic and recurrent inflammation of the intestines.

Animal and human studies have suggested a potential role of the cytokine interleulin-17 (IL-17) in the pathogenesis of IBD, although the results have often been confounding. So far, clinical trials using antagonists of IL-17A have failed to show efficacy in treating Crohn’s disease, or worsened prognosis.

Ixekizumab, an antibody against IL-17A, is an effective monoclonal antibody approved for the treatment of plaque psoriasis. Considering the genetic overlap between psoriasis and IBD, and prior reports of adverse events in Crohn’s patients receiving IL-17A antagonists, Eli Lilly and Company, the pharmaceutical giant that helped developed ixekizumab, conducted a study to gain a better understanding of IBD incidence in psoriasis patients treated with ixekizumab.

The company set up an independent external committee to look at data from 4029 patients with moderate to severe psoriasis who have received ixekizumab. Participants were previously enrolled in one of 7 different randomized clinical trials for ixekizumab. Adjudication of IBD was performed according to an internationally recognized classification system, combining reviews of radiographic, endoscopic, pathological, clinical and laboratory features.

Published in the American Journal of Dermatology, the study found that rates of new IBD cases (comprising both Crohn’s disease and ulcerative colitis) were uncommon (<1%) in psoriasis patients receiving ixekizumab. They reported that flares of preexisting disease were also rare.

The authors, however, acknowledged one major limitation of the report: the post-hoc nature of the adjudication process, which may have limited the amount of data collection necessary for IBD confirmation. Also, no information on patient or family history of IBD was collected at the time of the trials. Furthermore, the study lacked information on the duration of earlier therapies that may have led to IBD symptoms i.e. before exposure to ixekizumab.

Albeit, the authors suggest that dermatologists monitor patients with concomitant psoriasis and IBD who are receiving IL-17 antibody therapy and advocate for providing full warnings and precautions when prescribing IL-17A antagonists.