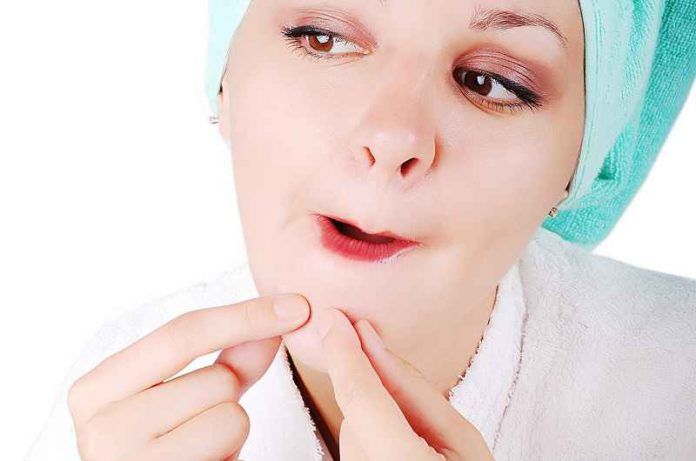 While acne is most common in adolescents, adults make up a large proportion of patients presenting with acne. Spironolactone is a diuretic which has been used as an off-label drug for acne since the 1980s. A new systematic review assessed the effects of spironolactone in adult women with acne.

Acne is a skin disease in which hair follicles become clogged with oil and dead skin cells. It involves the development of pimples, blackheads, whiteheads, and excess oil in areas of the skin with a high number of oil glands including the face, chest, and back. While acne is most widely known to affect adolescents, acne in adults represents a significant and increasing proportion of cases.

Acne is a disease of sebogenesis – the synthesis of sebum, the oily matter that lubricates and waterproofs our skin. During puberty, androgens and insulin-like growth factor (IGF-1) levels rise and mediate the onset of sebum production. In acne-prone individuals, bacteria such as Propionibacterium acnes proliferate in the sebaceous gland follicles and block them. This causes inflammation via leukocyte infiltration which results in pimples and other symptoms of acne.

Spironolactone is a corticoid receptor antagonist which can bind to both progesterone and androgen receptors. In the clinic, it is used as a diuretic drug to increase the production of urine. However, it has been used as an off-label drug for acne since the 1980s. It is believed that spironolactone causes a reduction in sebum by blocking the binding of testosterone to androgen receptors in sebum-producing cells, therefore decreasing sebum production. In particular, it is used to treat acne in women who have elevated levels of testosterone. Current traditional therapies for acne include oral antibiotics which have the potential to increase antibiotic resistance, and oral contraceptives which come with a host of side effects. Therefore, there is a need to better understand alternative therapies for acne.

A new study published in The American Journal of Clinical Dermatology conducted a hybrid systematic review for the effects of oral spironolactone in the management of acne in adult females. In this study, ten randomized controlled trials and 21 case series were assessed.

The authors of this study found that data from the majority of studies were unhelpful in determining the effectiveness of low doses of spironolactone compared to comparison drugs or placebos. However, one key study showed that a 200mg daily dose of spironolactone significantly improved inflamed acne lesions compared with a placebo. However, this higher dose was associated with menstrual side effects which were not present when females were given lower doses of the drug.

This study found limited evidence to show the benefits of spironolactone at the doses typically used in clinical practice. Despite this, many individuals do experience an improvement in acne symptoms when taking spironolactone. The authors suggest that clinicians who prescribe spironolactone to their patients should continue to base their prescriptions on consensus and expert opinions until more studies are conducted. Future research should aim to characterize the mechanism of spironolactone on improving acne and to establish a suitable dosing regimen with the most improvements and the least side effects.