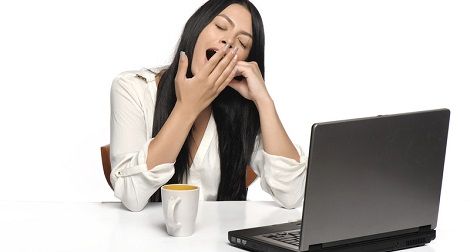 Yawning is an involuntary behaviour in humans that is typically associated with tiredness or boredom. There are two distinct types of yawns, spontaneous and contagious, which are identical in form but triggered in different ways. Spontaneous yawning is elicited by physiological factors such as arousal changes or brain temperature fluctuations, whereas contagious yawning is psychologically-driven by sensing or thinking about the action. Contagious yawning has been linked to empathy and social affiliation, and it has been reported that its frequency is reduced in crowded environments or when being watched.

A novel study in Nature: Scientific Reports systematically investigated the impact of social presence on contagious yawning frequency in participants in a controlled laboratory environment. 105 college-aged participants watched a contagious yawning stimulus video and were randomly assigned to one of five experimental conditions that varied in degree of social presence: 1) alone in room (control), 2) alone with a picture of a person’s eyes on the top of the monitor, 3) alone in room with an inactive webcam on top of the monitor, 4) alone in room with a webcam they were told was active and recording, and 5) a researcher sitting behind the participant in the room watching them during the experiment. Conditions 2) and 3) suggest that the participant is being watched, while 4) and 5) explicitly implies they are being watched.

This study reports that implied and actual social presence decreases contagious yawning behaviour in a controlled laboratory setting. While this study did not investigate the specific mechanism of this behavioural modulation, the authors suggest that two mechanisms may contribute to their results. First, the feeling of being watched may trigger arousal to the point where it counteracts yawning, and the second, that the social stigma associated with yawning in front of others may actively inhibit the action. Additional examination of the effects of personality, empathic processing, or social affiliation would further build upon the groundwork laid by the current study.