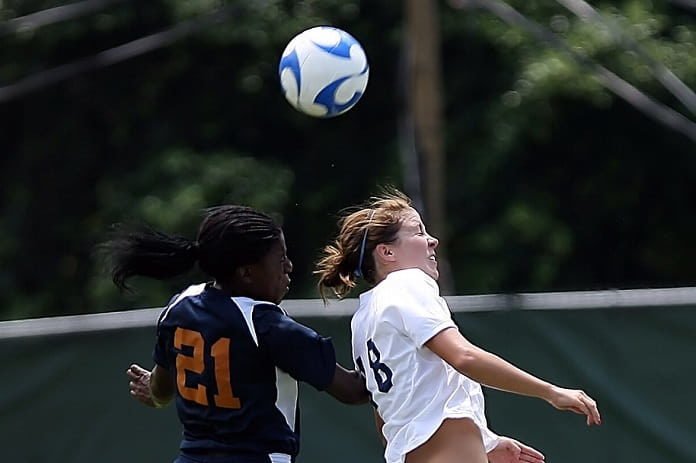 Soccer concussions are typically caused by players colliding. However, heading a soccer ball carries a great risk for significant brain injuries. A recent study by US researchers investigated the effects of brain injuries caused by soccer headers in female versus male athletes.

Repetitive head injuries in athletes playing contact sports can cause long-lasting harm. It has been linked to chronic traumatic encephalopathy which describes a disease that damages your brain and can cause cognitive decline and behavioural changes. Frequent ball heading by soccer players is of great concern as it has also been linked to a decline in cognitive function. Cognitive function includes processes such as attention, learning, reasoning, language, and memory. While soccer concussions are commonly caused by players colliding and falls, frequent soccer heading is considered to cause a greater cognitive decline in soccer players.

Female athletes are at greater risk of developing long-term complications

Previous studies have shown that after a brain injury, female athletes are at greater risk of developing harmful long-term effects compared to male athletes. Concussions are more common in men due to their higher participation rate in high-risk activities, however, women are more likely to have long-term complications and effects due to brain injuries. These findings are controversial, however, as women are typically more likely to report symptoms than men. On the other hand, men experience a longer delay back to normal activities and returning to work compared to women. Therefore, a more objective approach to reporting and assessing the impact of brain injuries between the sexes is required.

A recent study by US researchers aimed to investigate the impact of soccer headers on the brain. They also looked at whether female athletes are more sensitive to the long-term effects of brain injuries caused by heading. Their results were recently published in Neuroradiology.

The study included 98 amateur soccer players. The participants included 49 men with an average age of 25.7 years and 49 women with an average age of 25.8 years. They were matched 1:1 for age and their history of heading a soccer ball 12 months prior to the study. There was no significant difference between men and women with respect to the age they started playing soccer, the number of years played and years of education. The average number of headings per year were 487 for men and 469 for women. A whole-brain MRI was performed on each participant to assess any differences between the sexes related to brain injuries caused by heading a soccer ball.

The researchers assessed the brain images to determine if there was a link between the structure and integrity of white matter in the brain and repetitive soccer heading. White matter makes up most of your brain and is made up of axons which connect different parts of grey matter. Grey matter contains synapses, the connection between neurons which are responsible for communication in the nervous system. A decline in the integrity of white matter has been associated with a decline in cognitive function.

The findings of this study suggest that despite similar exposure to repetitive head trauma such as soccer headers, women are more susceptible to widespread alterations to their brain tissue than men. These sex-based differences on the long-term effects of repetitive head injuries on the brain highlight the need for further research on the effects of soccer heading in both sexes. Through further research, sex-specific guidelines for heading based on sex differences in vulnerability to brain injuries could be developed to ensure safer play.