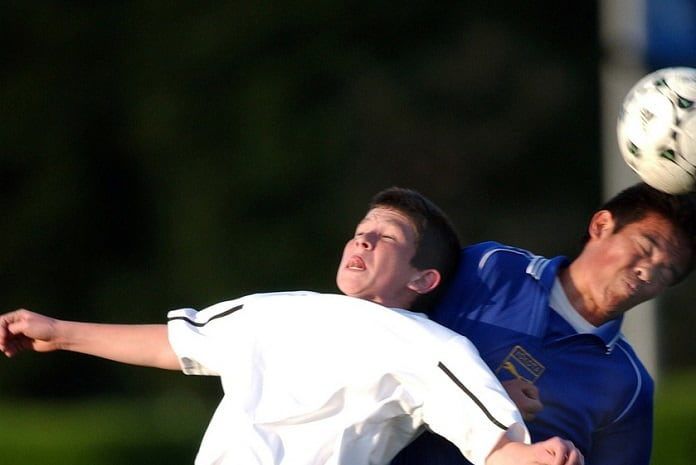 In a press release from the American Academy of Neurology Sports Concussion Conference, researchers announced that regularly heading a soccer ball may be associated with balance problems.

Soccer is the most widely played sport in the world.  While the ball is in play, the players, other than the goalie, are not allowed to touch the ball with their hands or arms.  As a result, players can be seen using their heads to hit the ball other than their feet. This is known as a soccer “header”.  When two players both go for the ball, unintentional head collisions can occur, increasing the risk of concussions.

A concussion, also called a mild traumatic brain injury (mTBI), is caused by a blow to the head causing the brain to “bruise” as it is pushed against the skull. Concussions can cause loss of consciousness and can be followed by temporary symptoms such as a headache, nausea, ringing in the ears, confusion, sleepiness, and loss of memory or balance.

While head collisions have been known to carry a high risk for concussion, there has been little data to determine whether repeated soccer headers can also negatively affect the brain and result in balance problems. Dr. Santos and a team of researchers from the United States studied soccer athletes to see if sub-concussive head impacts affected their balance. They recently presented their results at the American Academy of Neurology Sports Concussion Conference in July 2018.

They recruited a total of 20 amateur soccer players (10 men, 10 women, with an average age of 22 years old) to participate in their study. Each participant filled out a questionnaire estimating the average number of headers they make during practices and games.  Each participant also walked for 40 minutes on a foam walkway, and then again with galvanic vestibular stimulation (GVS) electrodes behind each ear.

The average player reported an averaged 451 headers in a year. They found that, when players made more than 500 headers, their foot placement changed by an average of 9 mm and their hip abduction response changed by 0.2 degrees. While these changes in balance are small and dependent upon the accuracy of the participant header estimates, they indicate that repeated subconcussive head impacts can still affect vestibular processing and balance.

US Soccer recommendations advise that heading the ball should be banned for players aged 10 and under and limited to practices only for players aged 11 to 13. Enforcing these rules and teaching players how to avoid head collisions can help minimize possible mild traumatic brain injuries.