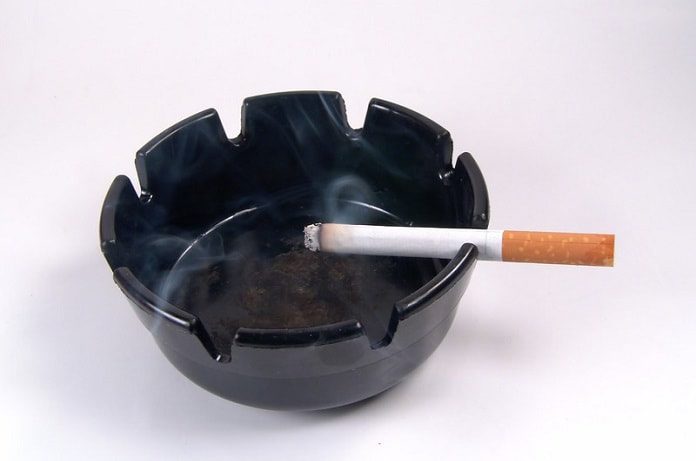 Individuals with post-traumatic stress disorder (PTSD) and major depressive disorder (MDD) have notably high rates of smoking prevalence.  A study investigating the effects of smoking on emotional response in the mentally ill, beyond those producing relief from withdrawal symptoms, found that it reduced the negative emotional response to stressors in patients with PTSD and MDD and enhanced the positive emotional ratings of a positive sensory stimulus.

Despite the movement towards a reduction in smoking in the general population, smoking rates remain high in the subset of the population affected by mental health disorders. Post-traumatic stress disorder (PTSD) and major depressive disorder (MDD) are conditions characterized by heightened negative emotions and a lack of positive emotions, as well as high rates of smoking prevalence, heavy cigarette use and low rates of cessation. Evidence on the psychological mechanisms which underlie smoking habits in populations with PTSD and MDD is lacking. A study by Cook and colleagues, published in the Journal of Abnormal Psychology, sought to fill this gap by investigating the link between smoking and emotional responses to stressors in PTSD and MDD patients.

The investigators recruited subjects from the Veterans Health Administration (VA) hospitals in Wisconsin using fliers and obtained 159 U.S. veterans for the study. Participants ranged in age from 18-65 years, smoked at least 10 cigarettes per day for the past year, and produced a carbon monoxide reading level of > 8 ppm at the time of recruitment. Participants were divided into 3 study groups: PTSD patients, MDD patients and participants with no psychiatric disorders (control group) and underwent two days of 3.5 hour laboratory sessions during which they underwent negative and positive mood-induction trials (three alternating trials per day). During mood-induction trials, participants were asked to imagine three positive and three negative autobiographical memories, which were recorded, then played back to participants on headsets during the laboratory sessions.

As part of the mood-induction trials, researchers provided participants with either a nicotine-containing cigarette or a non-nicotine cigarette (to be smoked during mood-induction) or a pen (to be held during mood-induction). At the beginning of each laboratory session, participants were asked to smoke one cigarette of their brand preference in order to standardize nicotine exposure across the study population and also ensure they were not in withdrawal when mood-induction began. The limitation that arises here is that researchers did not have control of the handling and dosing of cigarettes (people have different smoking patterns). Smoking was followed by a 22-minute rest period, during which participants read neutral sentences, then magazines supplied by the study. Following the rest period, participants self-reported their baseline emotion measures. Researchers then performed the mood-induction trials, and performed mood assessments at seven minutes and 18 minutes after mood induction.

Based on the self-reported data, it was found that PTSD and MDD groups reported heightened negative emotions in response to the negative stressors in the trials versus the non-psychiatric control group. PTSD and control subjects who smoked a cigarette (with or without nicotine) instead of holding a pen reported having a reduced negative emotional response to stressors and had a quicker emotional recovery time, as compared to the MDD group, which reported the opposite results: they experienced higher negative emotional responses to stressors while smoking during the trials. The authors speculate that the response in the PTSD and control groups could be indicative of an associative effect, where individuals experience positive reinforcement because of the act of smoking, rather than the intake of nicotine. With respect to exposure to positive stressors, participants within the PTSD and MDD groups who smoked cigarettes with nicotine reported enhanced positive emotions which lasted longer compared to participants who smoked nicotine-free cigarettes. A similar effect was reported by participants in the PTSD and control groups who were given nicotine cigarettes instead of the pen. The authors concluded that nicotine was found to enhance the positive emotional response to positive stimuli.

Some of the study’s limitations revolved around the cigarettes. For instance, participants were not asked to rate their experiences in smoking their preferred brand and the experimental cigarettes, therefore researchers were not able to capture measurements on cigarette qualities like strength. Additionally, the authors were not able to determine the processes by which the nicotine and nicotine-free cigarettes functioned in emotional regulation. The results also cannot be generalized to female smokers, as the study population was made up primarily of men. Despite this, the findings are valuable in that they provide new insight into how smoking affects emotional responses in the mentally ill and highlights a difference between the responses exhibited by patients with differing disorders.  There is a need for additional research to better understand the varying characteristics of mental health disorders. Building on these new findings may lead to the development of novel treatments and improve the likelihood of quitting for smokers affected by these conditions.