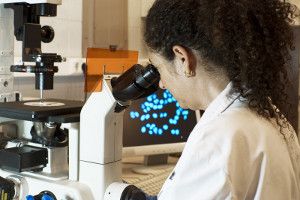 A study published in Nature Cell Biology reports that scientists have discovered the key to stop the over expression of cancerous genes.

In cancer cells the process of cell division goes on uncontrolled, which leads to tumour growth. Two specific proteins, E-cadherin and p120, which are involved in cell-to-cell interaction, have been associated with supressing tumour growth. However, recent studies have also found these proteins to be present in many aggressive cancer cells, which lead scientists at the Mayo clinic to believe that these two proteins behave differently in varying conditions. In the present study they set out to determine what might be causing the difference in the behaviour of E-cadherin and p120 in cancer cells compared with normal cells.

The researchers started by studying a protein named PLEKHA7, a protein that is known to interact with E-cadherin and p120. Many cells have distinct sides, a top and a bottom, including the cells involved in this study. They found that E-cadherin and p120 make two different kinds of complexes; one when they associate with PLEKHA7 at the top of the cell, and another when they associate at the bottom of the cell without PLEKHA7. Further genetic and biochemical experiments on the role of PLEKHA7 showed that the interaction of this protein to the rest of the complex was important for stopping the cancerous growth.

With further experiments the scientists were able to determine that PLEKHA7 interacts with a small molecule of RNA called microRNA (miRNA). These miRNA regulate gene expression by a mechanism called RNA interference. By comparing the healthy cells with the cancerous cells, scientists were able to figure out specifically which miRNA are responsible for preventing the expression of genes involved in the rogue process of cancerous growth. These miRNA are basically missing from the cancerous cells, and by adding them back, they were able to turn the cancer off.

Taken together, the results in this study have put together a very strong model of interaction between the adhesion proteins and miRNA, and how this leads to normal gene expression. With this information, scientists may truly have what they need to develop therapies in which they can actually turn cancer off!