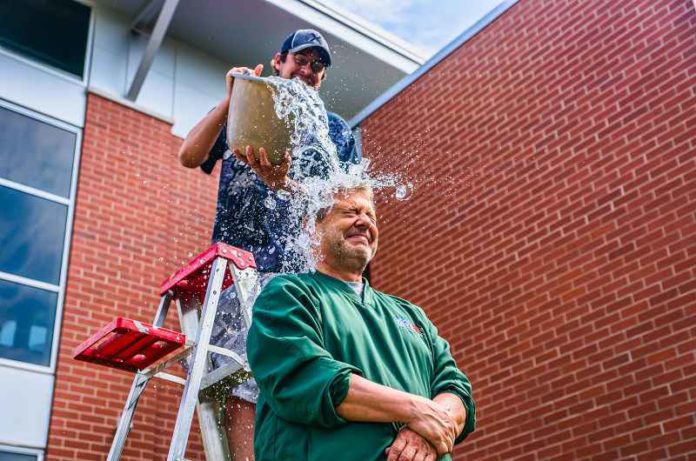 ALS is a disease that causes motor neuron degeneration, often resulting in death, but its causes and symptoms are not well understood. Gaiani and colleagues tested a possible marker of the disease that will prove useful to diagnosing ALS, providing patients with prognoses, and ultimately designing better clinical trials for future treatments.

Amyotrophic lateral sclerosis, also known as ALS or Lou Gehrig’s disease, is a disease in which the motor neurons degenerate. Motor neurons allow us to control our muscles by linking signals from the brain to those muscles. Degeneration of the motor neurons results in loss of muscle control. Eventually, this leads to trouble speaking, swallowing, and breathing. Most patients diagnosed with ALS die within two to four years. Stephen Hawking is a famous physicist with ALS, and he is exceptional in part because he has survived over 50 years with the disease. Recently, people aimed to raise awareness of this disease with the popular “ice bucket challenge”.

ALS has no known cause in the majority of cases, and no known cure. Better methods for diagnosing and predicting the course of ALS will improve the quality of life for individuals with the disease. They will also increase our chances of finding both a cause and a cure.

Gaiani and colleagues recently published a paper in JAMA Neurology testing one possible marker of ALS. Specifically, they looked at the accumulation of neurofilaments. Neurofilaments are proteins that provide structural support to motor neurons. When motor neurons degenerate, they release these proteins into the cerebrospinal fluid. Cerebrospinal fluid is a clear liquid found around the brain and spinal cord, which helps cushion these structures.

The researchers measured levels of neurofilaments in the cerebrospinal fluid of 176 individuals. This sample included 94 ALS patients, 20 dementia patients, and 18 patients with other motor neuron diseases. The control group included 44 individuals who displayed no signs of neurological disease. The ALS patients included 58 individuals with typical ALS, and 36 with more specific ALS syndromes. The researchers also kept track of these individuals over a period of five years to determine the likelihood of survival.

Gaiani and colleagues did not track changes in neurofilament levels over time. Doing so could provide a better understanding of what neurofilament levels mean. This may open the doors to predicting disease progression in individuals. Further, this study had a small number of ALS patients, and particularly of patients with specific ALS syndromes. A larger sample of these patients will clarify how neurofilament levels are linked to different syndromes. Together, these findings will improve diagnosis and better diagnoses will help researchers design better clinical trials.