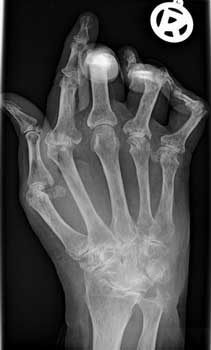 Are you bending over backwards to live a normal life with rheumatoid arthritis (RA); or, worse yet, not bending at all? While you might not be looking to jump quickly and nimbly over objects placed in your way, your ability to partake in daily life activities with some ease should be your right. So what are the barriers? And what are the solutions? Must you sacrifice all of your time in an effort to escape the limitations and restrictions associated with the medical condition that afflicts you?

Know A Little, Know A Lot

The term ‘rheumatoid arthritis’ was first coined in the 1850’s, but its diagnostic characteristics were only officially identified and reported in recent history. Knowledge and treatment of RA has been developing rapidly ever since.

At present, approximately 300,000 Canadians suffer from RA, with women affected three times more often than men. This condition can appear at any age but is most common amongst individuals aged 25 to 50, with an increased risk of developing the disease as one gets older.

RA has been deemed an autoimmune disease, which occurs when the body’s immune system begins to attack different parts of the body. In the case of RA, the target is most frequently the lining of the joints.

The cause of the disease is relatively unknown and varies from person to person. About 50% of RA cases are the result of genetic factors whereas in other cases environmental factors such as smoking and infections may act with genes to cause RA. Still yet, some cases can be attributed to environmental causes alone.

What to Look Out For

Watch out for these signs and speak to a physician if you experience any of them for over two weeks:

RA typically develops slowly, beginning in one area and spreading to other regions within weeks or months. This generally occurs in a symmetrical pattern with pain and inflammation occurring in both pairs of joints (e.g. both knees, both hips).

The Arthritis Society advises that “therapies, such as physiotherapy, occupational therapy, education, physical activity, and relaxation techniques are a very important part of the treatment of RA”. A healthy diet, exercise that is suited to your abilities and needs, heating and cold packs, assistive devices (such as a cane), support from others, and relaxation are additional ways to manage RA.

Common medications used for the management of RA include disease modifying anti-rheumatic drugs (DMARDs), non-steroidal anti-inflammatory drugs (NSAIDs), corticosteroids, and biologics. Surgery is also an option to treat RA, particularly in the case of severely damaged and nonfunctioning joints.

Investigational research seeking to uncover appropriate means of treating RA is taking place regularly. Some studies have shown that patients benefit from DMARDs, typically in combination with folic acid, which is used to reduce toxic effects. However, active RA often requires the support of additional medications, including other DMARDs or biologics. Nonetheless, further investigation is necessary and underway; opening the door for sufferers to engage in an important stage of addressing the complexities of RA.

Part of the solution to breaking down the barriers that stand in your way is to become an active agent in your health care. This can be achieved by joining fellow sufferers, researchers, and medical professionals in investigational research. Your experience of living with the condition will contribute to the management of the disease.

Perhaps this is easier said than done – but what better way to beat RA than to join the battle against it? Those who have participated in investigational research have contributed to early detection and prediction models that assist physicians in diagnosing rheumatoid arthritis earlier rather than later. Participants have been an integral part of developing existing and upcoming medications and treatments that contribute significantly to the fight against the disease.

It isn’t you! You did nothing to justify the symptoms you endure. And they are not simply symptoms – they are far more than that. But you have come this far and your strength will get you where you need to be.

While life changes are hard to come by, your active engagement, in conjunction with a supportive team of professionals and allies, will allow you to join the fight against RA and beat it!