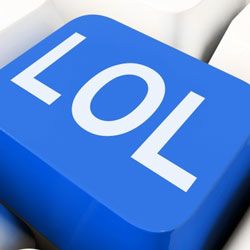 A good laugh can make us feel good; however, several studies have demonstrated that laughter can have real and measurable physiological benefits. An article published in the British Medical Journal has reviewed studies published since 1946 examining the medical effects of laughter. In addition to psychological benefits, exemplified by the positive association between life satisfaction and laughter, the summarized data also reveals the positive effects of laughter on a variety of health parameters and physiology.

The report summarized the findings of four separate studies that assessed the benefits of laughter on cardiovascular function. In three of the studies, participants were divided into intervention versus control groups. In the intervention groups, the participants watched a 30 minute humorous video while the participants in the control groups watched a 30 minute documentary. In these studies, the participants were assessed for measures of cardiovascular health, including: arterial stiffness, wave reflections, and carotid arterial compliance. Collectively, these studies revealed that participants in the intervention groups had significantly decreased arterial wall stiffness, improved endothelial function, and a reduced risk of myocardial infarction. In a fourth study, including only patients with coronary heart disease, questionnaires were designed to assess a person’s tendency to laugh during daily life and activities. This study revealed an inverse correlation between humor and occurrence of coronary heart disease.

The respiratory benefits of laughter were demonstrated by a study of patients with chronic obstructive pulmonary disease. Patients were entertained by a clown for an hour, followed by assessments of lung function. The results showed that patients in the intervention group had improved lung function compared to patients in the control group.

When assessing the effect of genuine laughter in healthy people, it was found that 15 minutes of laughing can burn up to 167.2kJ (40kcal). Another study looked at blood glucose levels in patients with type 2 diabetes, who either watched a comedy show or a ‘monotonous lecture’. The study reported that the post prandial increase in glucose was lowered by 2.5mmol/L in the group who attended the comedy show compared with the group who attended the lecture.

An interesting study that was included in the review evaluated the effects of laughter on success rates of in vitro fertilization (IVF). This study reported a 16% increase in rate of successful pregnancy in women who were entertained by a clown for 12-15 minutes following IVF, compared to women who were not.

Interestingly, the only clinical study currently registered including laughter as an intervention is a study that will be examining the effects of clowns on post-surgical analgesia in children. The study will assess the anxiety levels before surgery, in addition to the use of analgesics following surgery. The intervention in this study will be a medical clown, while the control group will have no exposure to the clown.

There is currently a great deal of interest in the mind-body connection and the idea that the emotions have the potential to impact upon physical health. This review supports these views and would suggest that further study, particularly in regards to laughter, may hold potential medical benefits.