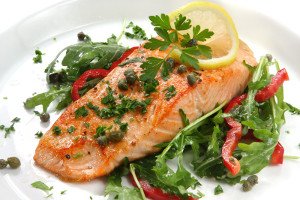 The incidence of depression is on the rise, and while there are drug treatments available, more and more studies are investigating modifiable risk factors in an aim to prevent depression before it even begins. Such is the case in a recent study that investigated the role of eating fish and risk of depression. Previous studies have had conflicting results, leading researchers to conduct a review of all available data to see what the combined studies could reveal about the role of fish in preventing depression. A total of 26 studies were included in the review.

The study reported a significant reduction in risk of depression with increased intake of fish. This was true for both men and women. Interestingly, the researchers reported that a significant association between eating fish and a reduced risk of depression was found only in European studies, and not studies conducted elsewhere. The authors suggest that there may be several reasons for the differences in results between studies, such as types of fish eaten, cooking methods, or differences in measurements of servings.

Nevertheless, the study found potential benefits of eating fish in reducing depression, which may be a result of several biological mechanisms, as summarized by the authors. Firstly, n-3 polyunsaturated fatty acids contained in the fish play a role in modification of serotonergic and dopaminergic neurotransmission. Secondly, a high level of fish consumption could be indicative of an overall healthier diet, which can also reduce the risk of depression. The researchers however, state that further study is necessary to determine the mechanisms involved in the protective effects of eating fish on risk of depression, in addition to whether types of fish eaten makes a difference to the observed effects.