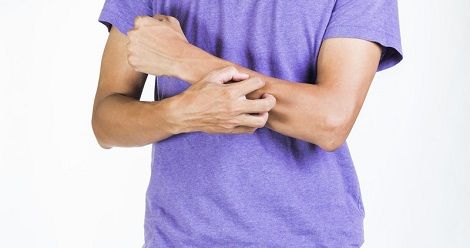 A new Danish study reports that people with psoriasis have an increased risk of developing abdominal aortic aneurysm, and the risk increases with the increase in psoriasis severity

Psoriasis is considered to be one of the least understood, but most irritating, skin disorders. It is characterized by skin cells which multiply ten times faster than normal. As part of the normal epidermal process, skin cells grow and divide in the basement membrane, which is located just under the epidermis. New cells get pushed up into the epidermis, where they no longer receive blood or nutrients. Since they do not receive any materials, these underlying skin cells reach the skin’s surface and die, where they are naturally sloughed off and replaced. In psoriasis, the increased speed of multiplication causes increased numbers of dead skin cells. The large amount of cells causes the formation of raised, red plaques which are covered with white scales.

Psoriasis has been considered an isolated skin disease, but new research suggests that it may be related to other inflammatory diseases.

A new study published in Arteriosclerosis, Thrombosis, and Vascular Biology has reported that psoriasis increases the risk of developing abdominal aortic aneurysm (AAA). AAA is a localized enlargement of the abdominal aorta, the largest artery in the abdominal cavity. In AAA, the abdominal aorta is 50% larger than normal and may result in its rupturing. Normally AAA becomes more common with age, but current research suggests that it may have a distinct inflammatory component, where the inflammation seen in the aortic cell wall is similar to the inflammation pathways activated in the skin of people with psoriasis.

To test the link between psoriasis and AAA, researchers of this study analyzed the Danish national register of adult residents and followed up with almost 5.5 million people from 1997 to 2011. Researchers noted which participants had psoriasis, which ones developed AAA and which ones passed away. In their analysis, researchers determined that 59, 423 had mild psoriasis while 11, 566 had severe psoriasis. Results showed that those with mild psoriasis had a 20% higher risk of developing AAA, compared to those that did not have psoriasis; in people with severe psoriasis that risk increased to 67%.

Researchers hope that this study can be used in order to change the perception of psoriasis to one where it is considered as a systemic inflammatory disease, rather than an isolated skin disease. This newly discovered link between psoriasis severity and increased risk of AAA should also prompt medical practitioners to screen for AAA in psoriasis patients and should influence the conduction of studies that look at what could be done to help reduce the risk of AAA.