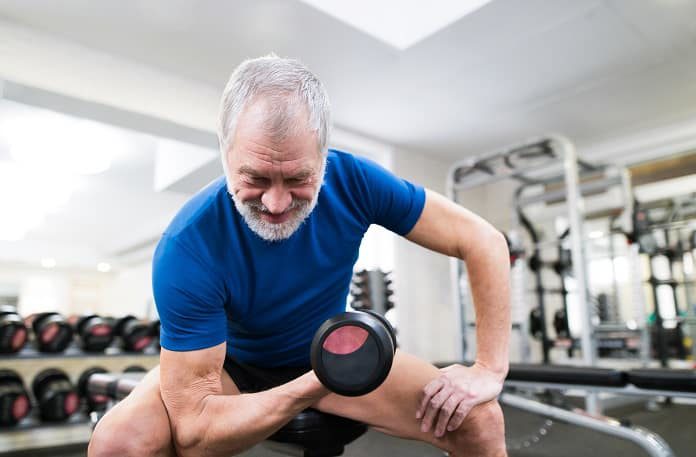 A recent study examines whether the consumption of protein before sleep can enhance protein synthesis in skeletal muscles.

A previous study has shown that 40 g of protein given intragastrically while sleeping was able to provide free amino acids for overnight protein synthesis. This method, however, would be better suited for older individuals who are unable to satisfy their protein requirements and need to preserve muscle mass, rather than as a practical method for healthy, non-compromised individuals to increase muscle mass. As such, a study published in The Journal of Nutrition investigated the effect of ingesting protein before sleep on overnight protein synthesis.

Using a double-blind and randomized design, researchers assigned 48 males to one of four groups, depending on the amount of protein received: 40 g of casein, 20 g of casein, 20 g of casein and 1.5 g leucine or a placebo. For inclusion in the study, participants had to be male, over 65 years of age, had a BMI of 20-30, and could not use protein supplements. They also needed to be on an exercise program or have lost over 3 kg of weight in the last three months. Additionally, they could not be smokers, have diabetes, or have illnesses or take medications affecting muscle metabolism, limb mobility, coagulation, or neurological, renal, and gastrointestinal function.

To prepare for the study, the participants were required to maintain a regular diet and not engage in rigorous physical activity up to two days before the trial. They then participated in an overnight fast. Researchers took anthropometric measurements as well as baseline measurements of variables such as plasma glucose, insulin, and glucose tolerance. Each participant had a diet created for them based on their personal caloric needs consisting of three meals and two snacks. Participants also drank a beverage with one of the quantities of protein and went to sleep. This beverage consisted of water, vanilla flavour, and casein protein. The placebo group only received water with vanilla flavour.

During sleep, researchers used wrist monitors on the participants to measure variables describing sleep activity such as bedtime, wake-up time, sleep efficiency and sleep-onset latency. Using the Pittsburgh sleep quality index, the quality of sleep was measured from very poor to very good. Participants with poor to very poor sleep were excluded.

To conclude, synthesis of muscle proteins increases with pre-sleep protein intake. It was shown that at least 40 g of protein increases the availability of amino acids in the plasma, which is then incorporated in the body to build muscle protein. The addition of 1.5 g of leucine to one treatment group was based on studies showing fortification of proteins with leucine can increase protein synthesis rates, but this study showed the effect of leucine to be slight. It is of interest to incorporate physical activity with these interventions over a longer time frame to investigate the effects on muscle mass. In all, this study displayed the feasibility of using pre-sleep protein intake to maintain muscle mass in the older population.

Does soccer headers cause more brain damage in women than men?