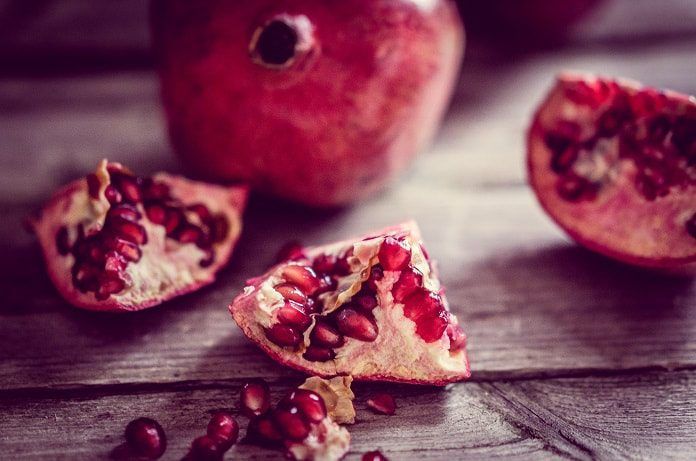 An arginine-and pomegranate-juice drink improved male endurance levels during and after exercise, one study found. Natural compounds without any added sugars may be the next power beverages.

Arginine is a naturally occurring amino acid that is present in high levels in watermelon, a cool summertime treat. When the human body synthesizes it, arginine augments blood flow and assists with muscle repair after exercise, among other functions.
Researchers associated with three Spanish universities discovered that a mixture of watermelon and pomegranate juice helped high-intensity exercisers achieve greater performance levels. The Journal of Agricultural and Food Chemistry published the findings in May 2017.
The four-week study included 19 healthy males with a mean age of 24 years. Stretching ability and body mass index (BMI) were measured, and blood samples were collected at baseline.
Participants consented to a host of conditions, such as avoiding alcohol and caffeine for 24 hours before and after their physical tests. They were also required to follow a resistance-training regimen with three exercise sessions per week for a minimum of at least four years prior to study acceptance. They also agreed to avoid “exhaustive training” for two days prior BMI measurements, stretching quotients, heart rates measurements and blood draws.
The researchers formulated a one-day physical regimen and utilized three specially prepared watermelon-juice concoctions and a placebo. Participants were given either watermelon juice, watermelon juice enhanced with arginine, a mixture of watermelon juice infused with pomegranate concentrate and enhanced with arginine or a placebo.
Each week the participants blindly consumed 200 ml, or 4/5 of a cup, of one of the three watermelon-infused cocktails or the placebo, ingesting each sample just once. Sixty minutes after drinking the treatment, the subjects warmed up by cycling and stretching their muscles, then lifted calibrated weights in a half-squat exercise. Seven days elapsed between each evaluation.
After finishing the sessions, the scientists measured the participants’ aforementioned physical indices and their perceived level of exertion, and also notated participants’ limb-muscle soreness and drew another blood sample from each.
The researchers discovered that consuming the watermelon juice infused with pomegranate juice was associated with the highest sustained energy/exercise levels, along with lower heart-rate and blood-pressure readings and less leg- and arm-muscle soreness.
They posited that pomegranate’s antioxidant and anti-inflammatory traits are primary influencers allowing people to become quickly refreshed after engaging in vigorous exercise. When pomegranate concentrate was combined with arginine, measurements revealed that this ingested concoction produced a nearly 3% average peak-level-performance increase.
The study’s strengths lie in the fact the researchers allowed sufficient time between the different beverage intakes and exercise sessions to ensure the immediate-past metabolic effects had dissipated. Further, they augmented existing research, building more precise data that detailed a range of physiological markers. The results suggest that such natural beverages may be beneficial to those working in high-physical-demand conditions.
The authors stated that the most significant limitation is the fact they did not include a test beverage containing pomegranate concentrate without arginine. Also, they note that results may vary in women. Thus, manufacturers may want to look more toward Mother Nature than to rely on sugary, tinted, chemical fluids for promoting endurance and energy.
Written by Susan Mercer Hinrichs, MA, MBA, CPhT
Reference: Consumption of Watermelon Juice Enriched in L-Citrulline and Pomegranate Ellagitannins Enhanced Metabolism during Physical Exercise
Authors: Ascension Martinez-Sanchez; Fernando Alacid, Jacobo A. Rubio-Arias, Barbara Fernandez-Lobato, Domingo J. Ramos-Campo and Encarna Aguayo
Facebook Comments

Fight the Cold with Green Tea

Benefits of Cocoa Flavanols on Heart Health Are Enhanced by Methylxanthines