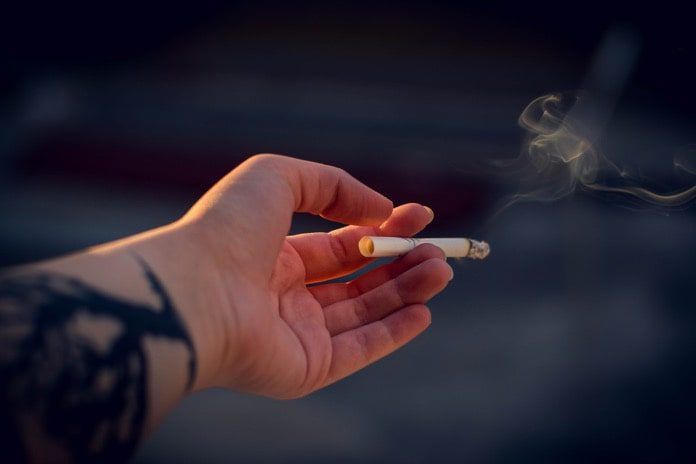 Understanding the mechanisms of nicotine addiction can provide new avenues of treatment. In a new study published in Biological Psychiatry, Hirvonen and colleagues assess brain function and its relation to addiction.

The human brain contains specialized neurons that respond to cannabinoids. A reduction in the number of working cannabinoid receptors has been linked to both marijuana and alcohol dependence. However, many patients with psychiatric disorders also smoke tobacco, and it is possible that cannabinoid receptors also play a role in nicotine addiction.

To investigate these links, Hirvonen and colleagues published a new paper in Biological Psychiatry assessing the activity of cannabinoid receptors in the brains of smokers and nonsmokers using PET scans. Positron emission tomography (PET) scans can help visualize brain regions that are actively using glucose—the more glucose, the more active the region.

The researchers included a total of 46 healthy men with no history of substance abuse, of whom 18 were smokers and the rest were nonsmokers, in addition to previously analyzed data from 30 cannabis smokers, of whom 24 smoked tobacco, and 18 patients with a alcohol dependence, of whom 11 smoked tobacco.

The researchers found that tobacco smoking diminished the activity of cannabinoid receptors in the brain by about 20% compared to healthy controls. However, this effect was not additive to the effects of cannabis or alcohol dependence, meaning that individuals who smoked both cannabis and tobacco or were dependent on both alcohol and tobacco, did not have substantially greater reduction than those individuals who only used one of the substances.

Further, at least some of the effects of tobacco smoking were due to the presence of specific genetic variants in the smokers. There was no additional effect from smoking during adolescence.

The results from this study clarify some of the mechanisms by which tobacco addiction works; tobacco likely works on the brain indirectly, by modulating the brain’s own cannabinoid receptors, unlike marijuana, which directly binds to the brain’s cannabinoid receptors. These findings provide a new avenue of research for drugs targeting substance abuse disorders.

Future work should include women and a more diverse patient sample, as the researchers point out that tobacco smoking may have different effects on healthy brains and in brains of patients with psychiatric illnesses, such as schizophrenia.