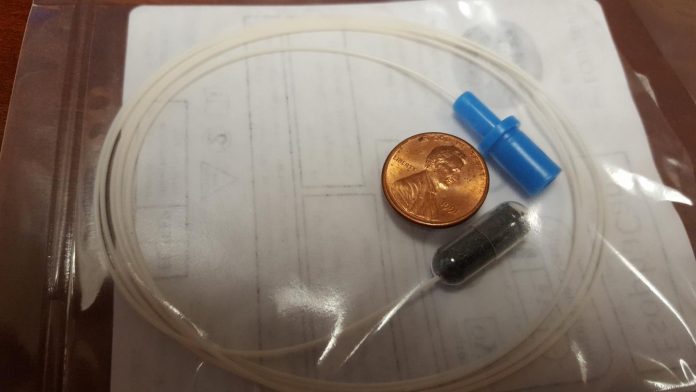 A new screening method that uses a sponge-on-a-string device could help save lives by detecting Barrett’s esophagus, a precursor to esophageal cancer.

The researchers conducted their study to evaluate the EsophaCap in 80 patients. A total of 85% of patients swallowed the EsophaCap successfully, and 100% of those successfully retrieved the sponge. No adverse events were reported with using EsophaCap in any of the subjects.These cell samples were then analyzed using a methylation on beads (MOB) technique that can analyze DNA from a small cell sample.

Eight genes that are implicated in Barrett’s esophagus, were examined and compared between patients diagnosed with Barrett’s esophagus and control patients. Not only did the EsophaCap demonstrate its safety and efficacy in retrieving cell samples, but the methylation on beads technique for analyzing the DNA was also found to be more sensitive than traditional DNA extraction methods and is a reliable method of diagnosis.

Current endoscopy screening methods are expensive and unreliable at detecting Barrett’s esophagus. This study demonstrates that the EsophaCap is an easy, safe, cost-effective, and minimally invasive tool to sample esophageal cells. In combination with the methylation on beads DNA analyzing technique, this could be a promising new strategy to screen for Barrett’s esophagus in patients and thus improve esophageal cancer outcomes. The positive results from this study highlight the need for future studies done in larger populations.