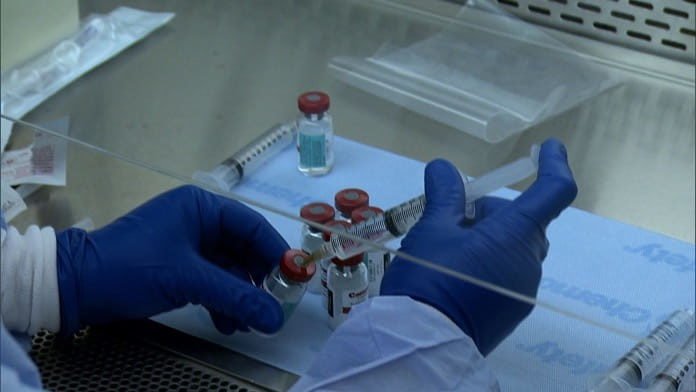 Once in the human body, the HIV-1 virus has the capacity to integrate itself into the human genome and replicate using the replication machinery of its host. Even with the immune response combating the viral infection through programmed cell death of cells with viral DNA, a small reservoir of HIV-1 can still survive in the human genome and multiply. As a result, one cannot be cured of HIV-1, but can only go through treatment options that lower the viral load in the body.

Treatment options include antiretroviral therapy (ART) or broadly neutralizing monoclonal anti-HIV-1 antibodies (bNAbs). Although ARTs are the traditional options, antibody therapy has the added advantage of interacting with the human immune system to also defend against further viral proliferation events. Despite this, both methods of treatment still lead to an eventual increase in viral load as resistant viruses emerge. The best results are often seen in combination therapies, where more than one antiviral medication is used, or in antibody therapies where more than one antibody is used.

Could stronger antibodies lower the number of viruses?

Previous human studies with combinations of antibodies have not shown much improvement in lowering viral load, but this may have been due to the fact that these previous combinations consisted of weaker antibodies. Mendoza and colleagues were interested in seeing if, during antiretroviral therapy using analytical treatment interruption (ATI), the use of stronger antibodies could lower viral load in humans with HIV-1. They published their study in Nature.

They conducted a clinical trial using lab assays to screen for viruses susceptible to the two antibodies in individuals who were HIV-1 positive. These individuals that were enrolled in their clinical trial were already on ART. A total of 15 individuals met their strict criteria, but 11 continued on due to four of them showing too high viral load. Antibody infusions were the method of delivery to the individuals and the investigators concluded, after some testing, that the combination antibody therapy was safe to use in these individuals.

Out of the 11 participants, they showed that viral load was controllable for about 15 weeks in nine of the individuals. However, there were instances that occurred where there was a rebound in viral load in two participants. Through additional analysis, there was some evidence that those who rebounded may have had some viruses in their body resistant to either antibody used in the combination antibody therapy, which could explain why the therapy was not as effective on them. The same logic was suggested for the previous four that were excluded from further analysis, where there may have been viruses resistant to both antibodies, which could explain why the treatment was ineffective.

Other explanations also showed that some viruses may have had mutations on the target site that the antibodies recognized, leading to ineffective antibody therapy. So, the authors believed that the screening methods may not have been sensitive enough to detect the viral resistance in the two rebound individuals. A higher concentration of the antibody combination seemed to be associated with no rebound in viral load. Overall, they also were able to show that in the study period alone, there was no case of any individual (of the nine individuals studied) who showed resistance to both antibodies simultaneously.

Therefore, in individuals who received the combination antibody therapy (i.e. showing susceptibility to both antibodies) at a sufficient concentration, the number of viruses was effectively kept at a minimum. Lower concentrations could result in viral load rebound.

There are still several studies that should be done before combo antibody therapies can be feasible. A longer observation time of those using this combo therapy would be essential in observing whether the low viral load can be maintained. It must be stressed that HIV-1 is a very versatile virus, with multiple resistances to several types of antibodies and other medication, with the capacity to become resistant to more. Therefore, this dual antibody therapy alone may not be enough. More antibodies or ART may have to be used in the future.