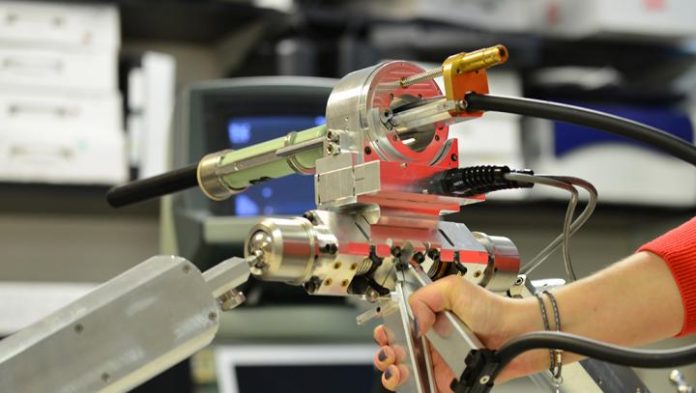 Vaginal cancer is a rare type of cancer that starts in the vagina. Symptoms can include pain and blood from the vagina other than menstrual cycle blood. There are often no signs of this cancer and a doctor may only find it during a routine check-up. However, if it is diagnosed at an early stage, vaginal cancer has an excellent chance for a cure.

One of the treatments for vaginal cancer is interstitial brachytherapy. It is a type of radiotherapy in which a doctor injects a high dose of radiation into the tumor or surrounding areas with thin needles under anaesthesia. It is called a high-dose-rate (HDR) transperineal interstitial approach.

To minimize the side effects to nearby organs, such as the bladder and rectum, the radioactive implant should be placed accurately into the tumor. Unfortunately, there are no standard visualizing methods used during the delivery of the implant.

The clinician can assess the needle’s position with CT images only after the completion of the procedure when the relocating is already impossible. To solve with this problem, researchers recently developed a new ultrasound system. They published their results in the Journal of Medical Imaging.

The main goal of the study was to transform 2D ultrasound images to 360-degree, 3D images, which would give an exact location of vaginal cancer, nearby organs and the position of the needles during the procedure. The 360-degree rotation system allows healthcare providers to clearly see all needles and nearby organs on the images. This technique allows physicians to relocate needles immediately if they did not reach the tumor site.

Six women with vaginal cancer enrolled in the study at the London Health Science Centre in London, Canada. The complete scan took 20 seconds and was available immediately after the completion.

To assess the reliability of the results, the investigators compared the new 3D images to the standard after-treatment CT scan images. Overall, the 360-degree, 3D ultrasound gives a clear and precise picture of all needles, the rectum, catheter in the urethra, bladder, and vaginal wall.

New probe will improve the effectiveness of therapy

The current study gives a good prognosis for the future treatment of vaginal and uterine cancer. Ultrasound is easily accessible at every hospital site and relatively cheap. Live imaging during the procedure gives the opportunity to adjust the needle location during the injection. This will improve the effectiveness of the therapy by delivering an accurate radiation dose right into the vaginal cancer site and minimize the radiation overload on nearby organs.

Despite the excellent results, further studies with more patient involvement are needed to assess the effectiveness and also test minor changes in needle displacement on two types of imaging. Also, the current system is limited only for the lower part of the vagina.

To extend the visualization up to the womb and improve the radiotherapy for gynecological tumors such as uterine cancer, the same research team is currently conducting additional studies using the same system.