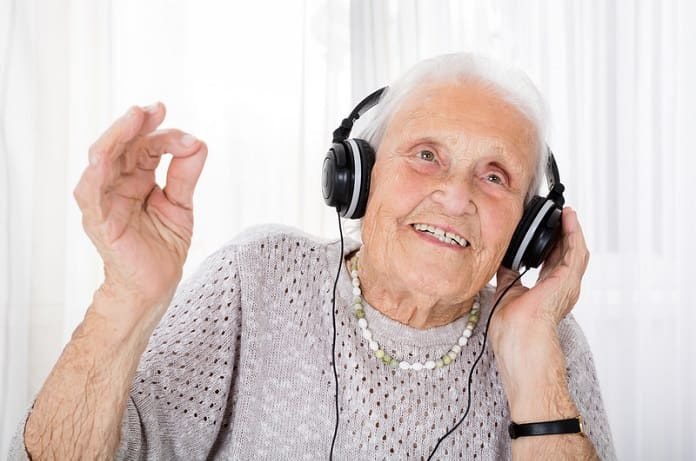 Music therapy is a promising tool in the treatment of Alzheimer’s and other neurodegenerative diseases. A new course offered by Ithaca College and a student organization provide music therapy to local nursing home residents. With so much enthusiasm for the course and organization, Ithaca College may start offering a Music as Medicine major or minor.

Music therapy is a powerful tool that has shown promise in the treatment of various brain disorders. Music activates the right hemisphere of our brains, while language is focused in Broca’s and Wernicke’s areas, in the left hemisphere. Music therapy has been used successfully in recovery for patients with aphasia, which can be caused by blunt trauma to Broca and/or Wernicke’s areas or stroke. For patients with Alzheimer’s disease, degeneration of brain tissue is global and random; therapy that can call upon multiple areas of the brain and tap into well-rehearsed responses can be quite effective. In music therapy, the use of lyrical pieces activates many areas of the brain and if the piece is well known to the patient it can activate a well-rehearsed response. There is exciting potential for musical therapy as a treatment for Alzheimer’s disease.

A new course offered at Ithaca College, Exploring Music as Medicine, is showing promising results. The course teaches students how to perform for dementia and Alzheimer’s patients and assigns them to local nursing homes. In one case, a student sang “Over the Rainbow” to a resident, who was able to recall and tell stories to the student about her life and children. Another student, Ryan Mewhorter, was inspired to start a student organization after hearing about the program. The organization, Healing through Musical Companionship, has its members perform weekly visits to a local center for rehabilitation and nursing in Ithaca and play recorded music for patients—preferable for those students who are not musicians or singers. Recorded music has its benefits, but Mewhorter finds that live performance offers a more direct connection as headphones are used for recorded music, removing some ability to communicate. Performance is also easier to sing along and follow the beat, as it is able to be modified for the patient.

The amount of enthusiasm for this course and the student organization has led to talks of a possible expansion to offer a major or minor in Music as Medicine. This new program would involve a wide variety of departments from music to gerontology to speech-language pathology and more. Although this area is very new, it appears to hold great potential for promising results and meaningful impact.