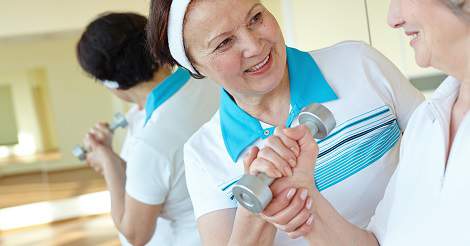 The relationship between muscle mass and muscle strength can be used as tools to predict mortality among elderly people. However, the prediction power is higher for men when compared to women.

We lose muscle mass and strength when we get older! The relationship between muscle mass and muscle strength represents an index of muscle quality (MQI), i.e., the capacity of our muscles to generate force for a given amount of muscle.

This index has been used as a clinical marker of frailty among older people, and can probably predict the risk of mortality. To test this hypothesis, the authors of a new study used data of community-dwelling elderly people from the Third National Health and Nutrition Examination Survey, 1988e1994 (NHANES III). The MQI was calculated based on simple measures such as the timed sit-to-stand test, body mass, and leg length, while vital status was identified using the National Death Index database. The risk of mortality was adjusted for age, sex, and race, behavioral (e.g., smoking status, self-rated health) and clinical information (hospitalization, falls, cognitive function, comorbidities, laboratory tests, balance and gait speed).

More than three thousand participants died during the 15 years of this study. Researchers determined that there was a relationship between MQI and mortality risk; those with a lower the MQI had a higher probability of dying when compared to those with a high MQI. This relationship seems to be stronger for men. The difference between genders could be explained by the fact that people, especially men, with more muscle strength and muscle mass experience more decline over time. It is also possible that factors such as proinflammatory cytokines and intramuscular adipose tissue infiltration may be implicated. The lower MQI was associated with older age, female sex, race, smoking status, hypertension, chronic obstructive pulmonary disease, myocardial infarction, self-rated health, hemoglobin, insulin, and gait speed. Almost forty percent of the mortality risk was explained by these variables. It is also possible that the MQI has implications for longevity since the deterioration in the neuromuscular system can interfere with the performance of the activities of daily living (e.g., preparing meals, taking medications as prescribed, shopping for groceries or clothing).

The sample size and follow-up period are strong characteristics for this study. However, the limitations consisted of the fact that the association cannot be casual, although important variables known to affect the risk of mortality were considered. Further studies should consider a variety of races and diagnosed health conditions (i.e., not self-rated conditions). However, the authors can suggest that the index of muscle quality can be used as a prognostic tool for mortality, even though it seems to output different results according to gender.