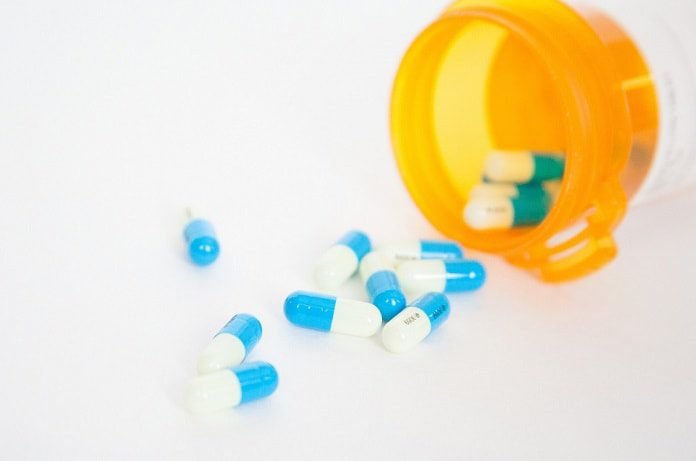 Though vancomycin – typically used as a last line of defense against methicillin-resistant Staphylococcus aureus (MRSA) – is from a class of resistance-delaying antibiotics, vancomycin-resistant bacterial strains have emerged. Vancomycin binds to certain protein precursors that permit the formation of bacterial cell walls. The binding pocket of vancomycin targets the tail ends of these precursors, which end in double alanine (Ala-Ala) residues. Targeting these precursors prevents bacterial cell walls from maturing, hampering bacterial function and contributing to bacterial death. Vancomycin-resistant bacteria, however, can sense vancomycin and change the Ala-Ala ends to alanine-lactate (Ala-Lac), preventing vancomycin from binding. Pocket-modified forms of vancomycin, capable of binding to both Ala-Ala and Ala-Lac ends and therefore enabling antibacterial activity against both vancomycin-susceptible and resistant bacteria, are in development. Further, adding 4-chlorobiphenyl-methyl (CBP) to a region of vancomycin outside of the binding pocket has been shown increase its efficacy.

In a recent study published in the Proceedings of the National Academy of Sciences, researchers investigated the effects of modifications to vancomycin on its antibacterial properties. Eighteen forms of vancomycin were evaluated: unaltered vancomycin, with an oxygen molecule in its binding pocket (vancomycin–O); pocket-modified vancomycin, for which the oxygen molecule has been replaced with a sulphur molecule (vancomycin–S), an imine group (vancomycin–NH), or 2 hydrogen atoms (vancomycin–H2); unaltered or pocket-modified vancomycin with a CBP molecule attached to a region outside the binding pocket (CBP–O, CBP–S, CBP–NH, and CBP–H2, respectively); vancomycin–O or vancomycin–H2 with an amine group attached to 1 of 4 other sites outside the binding pocket (RNH–O1, RNH–O2, RNH–O3, RNH–O4, and RNH–H2, respectively); and vancomycin–O or vancomycin–H2 with both CBP and RNH modifications (CBP-RNH–O1, CBP-RNH–O2, CBP-RNH–O3, CBP-RNH–O4, and CBP-RNH–H2, respectively). To test antibacterial activity, the smallest doses required to visibly limit growth (minimum inhibitory concentration, MIC) in MRSA, vancomycin-susceptible S. aureus (VSSA), and Enterococcus strains resistant to vancomycin A or B were recorded; cell wall maturity was assessed with respect to the prevalence of the cell wall protein precursor UDP-N-acetylmuramyl-depsipentapeptide (UAMDPP), greater amounts of which would suggest little incorporation into the cell wall and therefore less maturation; and cell wall integrity was assessed with respect to the amount of vancomycin detected inside VanA-resistant Enterococci.

Resistance was slow to develop among the vancomycin–H2 derivatives. After 50 exposures, the MIC increased only fourfold for CBP-RNH–H2, eightfold for CPB–H2, and sixteen-fold for RNH–H2 in E. faecium.

Overall, the results suggest that C1-aminomethylene vancomycin (CBP-RNH–H2), which can bind to either Ala-Ala or Ala-Lac residues, inhibits cell wall maturation and reduces cell wall integrity, making it 25,000-50,000 times more potent than unaltered vancomycin, and indicating that it may serve as an effective antibiotic against MRSA and vancomycin-resistant strains. The findings also suggest that the CBP and RNH modifications contribute to its antibacterial activity through Ala-Ala/Ala-Lac-independent inhibition of cell wall maturation and the reduction of cell wall integrity, respectively. Further research into vancomycin analogues with different binding pockets and peripheral alterations may be beneficial.