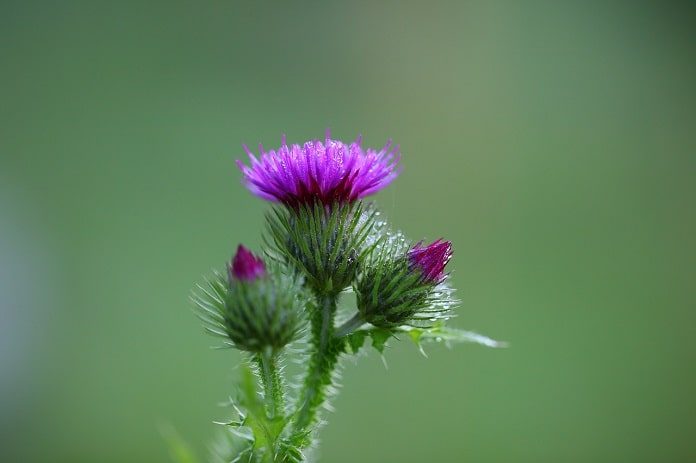 Milk thistle has been used to a number of health issues such as liver disease and anemia. Here, we discuss the research behind these uses and the safety of milk thistle.

Milk thistle (Silybummarianum) is a plant that contains a solitary purple flower along with glossy marbled leaves. Silymarin is the main part of milk thistle seeds, therefore, the terms “milk thistle” and “silymarin” are often used interchangeably. Milk thistle as a dietary supplement may be sold as capsules, powders, and extracts.

Throughout history, people have consumed milk thistle to treat liver disorders, including hepatitis and cirrhosis, and gallbladder problems. Nowadays, milk thistle is considered the most commonly used herbal supplement for liver problems in the United States, including the following indications: fatty liver disease, hepatitis, cirrhosis, and protecting the liver from environmental toxins.

Although studies regarding the use of milk thistle for liver diseases have mixed results, two studies considered reputable by the National Institute of Health (NIH) did not conclude any significant benefits for using milk thistle in liver diseases.

The first of which was the Hepatitis C Antiviral Long-Term Treatment Against Cirrhosis (HALT-C) study conducted in 2008. This study found that patients with hepatitis C who used milk thistle did have fewer and milder symptoms of liver disease in addition to a better self-reported quality of life, but they had no change in virus activity or liver inflammation.

The other study conducted in 2012 showed that consuming higher-than-usual doses of milk thistle was not any better than placebo for chronic hepatitis C after these patients did not respond to standard antiviral treatment.

Results from a study in 2013 demonstrated that milk thistle may enhance standard treatment in patients with Cooley’s anemia. However, a more recent review published in 2016 discussed how milk thistle has the potential to induce iron-deficiency anemia. In addition, a handful of earlier studies demonstrated the role of milk thistle in reducing iron overload when patients consume it with desferrioxamine, an iron chelator. As such, there remains a lack of consensus regarding how milk thistle affects anemia.

In general, clinical trials have found milk thistle to be well-tolerated when it is consumed in the recommended doses. Periodically there are reports regarding various gastrointestinal side effects. Milk thistle does have the potential to produce allergic reactions, but this is more common among people who have another allergy to a plant in the same family, such as ragweed, chrysanthemum, marigold, or daisy. Lastly, components found in milk thistle may lower blood sugar levels in diabetics, therefore caution is advised to check blood sugar levels regularly if consuming this product.