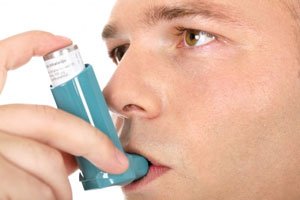 Mepolizumab is a humanized monoclonal antibody against interleukin-5. Mepolizumab treatment results in inhibition of eosinophilic inflammation of the airway, and ultimately reduces the need for treatment with glucocorticoids. A clinical trial for Mepolizumab has recently tested the effects of this targeted therapy in patients with severe asthma to determine whether it would be successful in reducing their need for treatment with glucocorticoids. The trial, called Mepolizumab as Adjunctive Therapy in Patients with Severe Asthma (MENSA), was a randomized phase 3 trial that was conducted between October 2012 and January 2014.

A total of 539 participants between 12 and 82 years old with severe asthma were recruited for the study. They were randomly assigned to one of two Mepolizumab treatment groups or a control group. The first treatment group received Mepolizumab at a dose of 75mg intravenously, and the second treatment group received a dose of 100mg subcutaneously. The treatment was given every 4 weeks for a total of 32 weeks. The primary outcome of the study was the number of clinically significant exacerbations, to an extent that would require treatment with glucocorticoids for at least three days, a visit to the ER, or hospitalization.

Additional clinical trials are recruiting participants to further test Mepolizumab for asthma control. A phase 3, multicentre, open label study of Mepolizumab given subcutaneously (100mg) is currently recruiting participants with severe eosinophilic asthma at 74 study locations across Europe, North and South America, and Australia. An estimated 375 participants aged 12 years and older will be recruited between now (Fall, 2014) and April 2017. The purpose of this study is to provide further data for long-term use and efficacy of Mepolizumab in patients who are at greater risk of needing higher doses of steroids for asthma control.

A second study currently recruiting participants 12 years and older has begun and will run until May 2016. This study is also being conducted at centres worldwide, and will recruit approximately 780 participants. This study also aims to assess the safety and effectiveness of Mepolizumab for asthma control. In addition, this study will address health-related quality of life, and lung function of participants with severe asthma who are taking Mepolizumab.

Image courtesy of marin at FreeDigitalPhotos.net