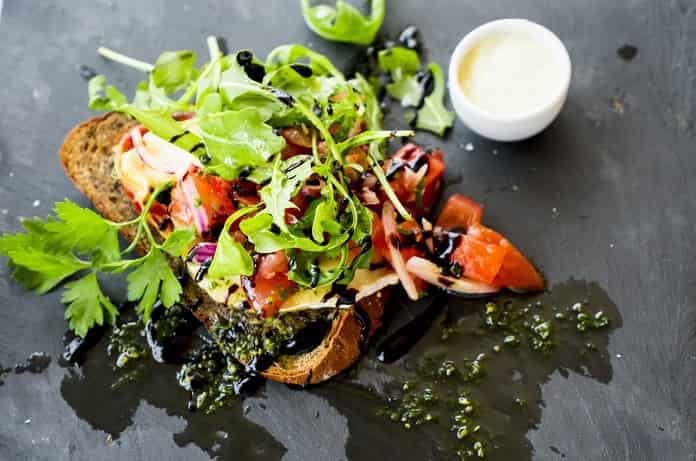 A recent study compares conventional pharmacological treatment for laryngopharyngeal reflux to a plant-based, Mediterranean diet with alkaline water as treatment.

Laryngopharyngeal reflux (LPR), is a condition similar to gastroesophageal reflux disease, but instead of the acid going back from the stomach to the esophagus, the contents of the stomach go up to the throat, voice box, or the nasal cavity. LPR is also sometimes associated with heartburn. Some additional symptoms include excessive throat clearing, a persistent cough, and postnasal drip. The symptoms vary largely, however, and the disease is sometimes hard to diagnose, which is why it is often referred to as silent reflux. The standard therapy for LPR uses proton pump inhibitors, but their efficacy is not sufficiently studied nor compared to other therapies. In a recent study published in JAMA Otolaryngology– Head & Neck Surgery, U.S. researchers looked at a diet-based approach, particularly the Mediterranean diet, to improve symptoms of LPR compared with standard proton pump inhibition treatment.

LPR is thought to be caused by exposure of the throat to an acidic environment in which a stomach enzyme, known as pepsin, can be active and cause damage to the environment. Hence, researchers have hypothesized that alkaline water and a low-acid diet can help the alleviate the symptoms of LPR. Furthermore, the digestion of plant proteins is believed to decrease the activity of pepsin when compared to animal proteins. Thus, the authors of this paper were interested to study an intervention against LPR comprising of alkaline water and a plant-based Mediterranean-style diet and compare it to the standard treatment.

LPR patients were placed into two cohorts, and scientists took a measure of their symptoms using the Reflux Symptom Index at the start of the study and six weeks after. One patient cohort was treated with proton pump inhibitors, while the other patient cohort was instructed to eat a Mediterranean diet, which is primarily plant-based, supplemented with alkaline water. The study included a total of 184 patients.

A six-point difference in the Reflux Symptom Index scores between the start of the study and six weeks after treatment initiation is considered a clinical responder. The authors of this study saw no difference between the conventional or diet-based treatment in terms of clinical responders. What they observed, however, is a significant decrease in the Reflux Symptom Index score in patients who were on the Mediterranean diet compared to the conventional treatment.

The use of proton pump inhibitors remains costly and, as shown in this study, their function is similar to a diet-based approach. The data presented in this study also hints toward the Mediterranean diet with alkaline water as being slightly more effective at reducing Reflux Symptom Index scores. Not only is a diet-based approach very feasible, but also accessible and affordable. The benefit this diet-based approach can be two-fold: adverse effects of drugs can be prevented and additional health benefits from a healthy, plant-based diet can be achieved, all the while providing a similar benefit as proton pump inhibitors in reducing symptoms of LPR.