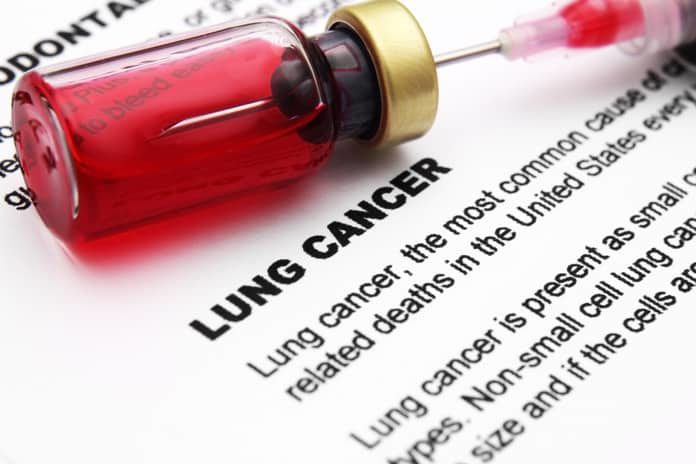 Lung Cancer is the third most common type of cancer in North America and is the leading cause of cancer deaths. While approximately 14% of new cancers diagnosed are lung cancers, it accounts for 25% of all cancer deaths. Lung cancer is a type of cancer that begins in the cells of the lungs as a cancerous or a malignant tumour and can spread to nearby tissues.

A tumour is a group of cells that grow and divide abnormally. There are several different types of tumours and cancers involving the lungs. Non-cancerous tumours in the lungs are called hamartoma or papilloma. A cancerous tumour, in contrast, can continue to grow into and destroy nearby tissue.  It can also spread cancer cells to other parts of the body in a process known as metastasizing.

Lung metastasis is cancer that originated elsewhere in the body and spread to the lungs. This type of cancer is treated differently to cancer that began in the lungs. Pleural mesothelioma is often mistaken for lung cancer, but this type of cancer starts in the pleura covering the lungs and not in the lungs themselves. The treatment and prognosis of pleural mesothelioma is very different from lung cancer.

Non-small-cell lung cancers (NSCLC) are the most common, comprising between 80-85% of all lung cancers. This type of cancer usually begins in the glandular tissue on the outer part of the lung, on the lung cells responsible for mucous production. There are several different types of NSCLCs, some of which are listed below. (Canadian Cancer Society)

These start in the glandular tissues on the outer part of the lung. They are the most common type of NSCLC. These tumours form on the lung cells responsible for mucous production. This cancer can be found in those who smoked or who never smoked, and is the most common lung cancer in women and young people.

This starts in the squamous cells that line the bronchi, or the large ducts that branch off the windpipe into the lungs. This type of cancer is most common in smokers.

In both smokers and non-smokers, the risk increases with age as more than half of new cases occur in those over 60 years, and the average age of diagnosis is 70 years.

Research has shown that as much as 45% of lung cancers are caused by modifiable risk factors. (Islami) These risk factors may increase the likelihood of developing lung cancer.

Although the research has been inconclusive thus far, these factors could possibly increase the risk of developing lung cancer.

Finding lung cancer early increases the chances that treatment will be successful. Studies have shown that screening using chest x-rays and sputum tests are not effective and therefore are not recommended.

Research has shown that screening with low-dose computed tomography (low-dose CT) can find cancer in people before they have symptoms. The National Lung Screening Trial was a large clinical trial that examined the use of low-dose CT of the chest to screen for lung cancer. This trial found that participants who received the LDCT had a 20% lower chance of dying from lung cancer than those who were screened using x-rays, and also seven percent lower chance of death from any cause. (Cressman)

In adults at high risk, the Canadian Task Force on Preventive Health Care (CTFPHC) recommends screening for lung cancer with low-dose CT once per year.  High-risk individuals include those who:

The CTFPHC also strongly recommends including support to help people quit smoking. In addition to increasing the chances of developing lung cancer, smoking also reduces the effectiveness of cancer treatments.

There may be no signs or symptoms in the early stages of lung cancer. For many, the symptoms don’t begin until cancer has already advanced to the later stages. The first signs are usually coughing or shortness of breath. The signs and symptoms are the same for all of the different types of lung cancer and can include: (Canadian Cancer Society )

Paraneoplastic syndrome describes a phenomenon in which substances produced by cancer cells affect the normal function of other organs or tissues. For example, squamous cell carcinoma is likely to cause hypercalcemia or too much calcium in the blood. Other examples of paraneoplastic syndromes include syndrome of inappropriate antidiuretic hormone (SIADH), Cushing syndrome, Lambert-Eaton syndrome, or paraneoplastic cerebellar degeneration.

Some of the tests that doctors use to diagnose and stage lung cancer are:

Once lung cancer is diagnosed, oncologists determine the size of a tumour and how far it has spread.  This is called staging.  Staging is based on symptoms and the results of diagnostic tests. NSCLC is staged as 0 to IV, and SCLC is considered either “limited” or “extensive”. Staging depends mainly on the size of the tumour, how deeply the tumour has invaded nearby tissue, and whether or not the cancer has spread to the lymph nodes or other parts of the body.

In stage 0, cancer cells are found only in the lining of the airway, or the air sacs.  With each stage, the tumour is slightly larger, and the likelihood that it has metastasized has increased. In stage IV cancer has spread to the other lung, and to other areas of the body.

Limited SCLC lung cancer is confined to one side of the chest, and extensive SCLC means that the lung cancer has spread to another side, or to other organs.

Staging helps doctors to decide which therapy to use. Accurate staging is extremely important because treatments that are effective at one stage could actually be harmful at another stage.  (Christopher Slatore MD and Suzanne C Lareau RN)

Surgery is a treatment option for early-stage NSCLC and provides the best chance for a cure. Lung surgery is a complex operation however, with serious risks. A thoracotomy is any surgery that creates an incision into the lungs, and is the most commonly used type of surgery. With increasing frequency however, doctors are using a technique called Video-assisted thoracic surgery (VATS), which require smaller incisions than a traditional thoracotomy. A rigid tube with a tiny video camera is placed through a small hole in the chest to allow the surgeon to see inside the chest.  Two other small holes allow the surgical instruments into the chest to perform the surgery.  Surgeons commonly use this technique to remove early-stage tumours near the outside of the lungs. (National Cancer Institute)

There are several different surgical options including:

Lung cancer is the leading cause of cancer deaths, and is by far the most preventable.  Symptoms frequently don’t appear until late stages and treatments are often unsuccessful. Avoiding cigarette smoke exposure is the best way to reduce the chances of developing lung cancer, and lung cancer screening for those who smoke is the most effective way to detect cancer early.