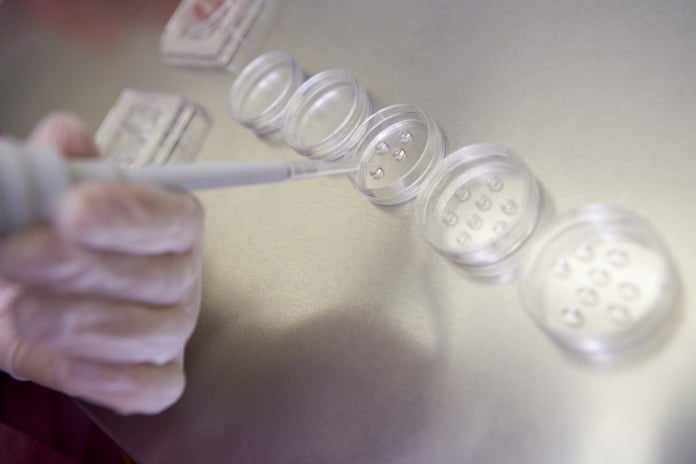 Researchers evaluated whether they may use young ovarian tissue to create lab-cultivated mature human eggs that could potentially help women with infertility.

Ovarian tissue has aggregates of cells that are known as primordial follicles. The immature egg cell can be found inside primordial follicles, and the immature egg cell and the follicle undergo maturation until puberty. After the commencement of puberty, the follicles rupture and relesase one egg per month. To date, mouse models have determined that complete development of eggs can be accomplished in a manner where in vitro grown (IVG) eggs from these primordial follicles eventually produced offspring. Although this procedure was successful in mice, very little is known about its potential for human IVG eggs. In mice, this procedure was made possible through a two-step culture system.

Infertility is described as a disease of the reproductive system in which a pregnancy cannot be achieved. By avoiding in vivo (within the body) dependence of egg maturation, this procedure may create an avenue to make lab-grown human eggs and eventually help with infertility. Researchers wanted to test whether they could make mature egg cells from primordial follicles and how they would attain this with specific culture systems.

In recently published work in Molecular Human Reproduction journal and discussed in Science, Telfer and her research team from the University of Edinburgh show their results on aiming to achieve complete egg development from human ovarian tissue that contained primordial follicles in order to combat infertility.

The research team took ovarian biopsies and dissected them to remove the primordial follicles. These follicles were cultured for eight days in a medium that harvested their potential to give rise to a secondary follicle. Secondary follicles were then subsequently cultured separately in a medium that contained a growth protein that is involved in reproductive physiology naturally in the human body. After another eight days, immature egg complexes were taken and cultured on a specialized matrix for another four days.

At the end of this, eggs greater than 100 microns in diameter were taken for in vitro maturation and to be analyzed. The steps involved in this procedure were not nearly 100% efficient. In the end, nine out of the original 87 secondary follicles produced a mature egg. Microscopic techniques revealed that there was in vitro growth to a mature egg. Although the culture system had been attained and they were able to show the creation of a mature egg from primordial follicles of ovarian tissue, the developmental potential of these eggs remains unknown.

There are some limitations of this study to keep in mind as the sample number of biopsies was small. In addition, the efficiency of the system is very low. The research team will have to work on developing an optimized system that will produce mature eggs. Scientists will also have to figure out the potential of these mature eggs to fertilize and give rise to offspring if they ever want this to be used in a clinical setting. This research study gives hope that a technique like this may be used one day in clinic to circumvent infertility, especially in patients that had to undergo chemotherapy and girls who are diagnosed with cancer prior to puberty. If scientists can improve and perfect this procedure and technique, infertile females may have the choice to save ovarian tissue as young girls in order to generate eggs later on in life for in vitro fertilization.