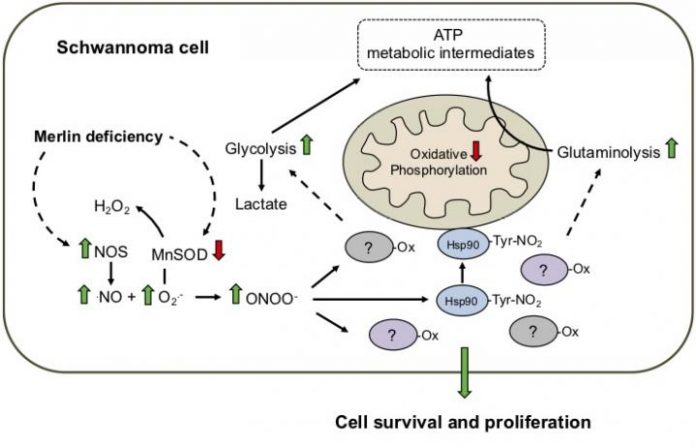 Tumours are characterized by uncontrolled cell growth, which is sustained by a series of cellular reactions to produce the energy and molecular building blocks for replication. This process, called cancer cell metabolism, relies on the activity of many proteins and enzymes involved in metabolic pathways. Scientists are now investigating how to target key metabolic proteins in an effort to “reprogram” cancer cell metabolism and inhibit tumour growth and survival.

A team from Oregon State University, The University of Central Florida and New York University have identified a protein modification that regulates the proliferation and survival of tumor cells. The researchers were studying neurofibromatosis type 2 (NF2), a condition characterized by tumours of the nervous system. These tumour cells produced a powerful oxidant called peroxynitrite that reacts with the amino acid, tyrosine in proteins. The downstream effect of this protein modification may alter protein function and aspects of cell metabolism.

Using primary tumour cells obtained from NF2 patients, as well as human and mouse cell models of NF2, the researchers showed that high levels of peroxynitrite are found in diseased cells. Further, peroxynitrite was responsible for modifying key metabolic enzymes to favour energy production. Together, their findings support the role of peroxynitrite in shifting cancer cell metabolism toward tumour growth and proliferation.

The study was published in the Journal of Biological Chemistry.

“To sustain persistent growth, tumor cells change the way they produce energy and building blocks and present a signature metabolic phenotype that differs from that of normal cells,” said Maca Franco, professor of biochemistry and biophysics in OSU’s College of Science. “We discovered that peroxynitrite, the most powerful oxidant produced by cells, controls the metabolic changes that occur in tumor cells of the nervous system and supports their growth. We believe that there are specific proteins that when they become nitrated acquire a new function they did not have before, and this new function may control tumor growth.”

The researchers believe that the proteins modified by peroxynitrite represent promising molecular targets for future drug development for NF2 and other cancers. By inhibiting proteins that are not modified in normal cells, these therapies may target tumour cells directly while minimizing damage to healthy tissues.