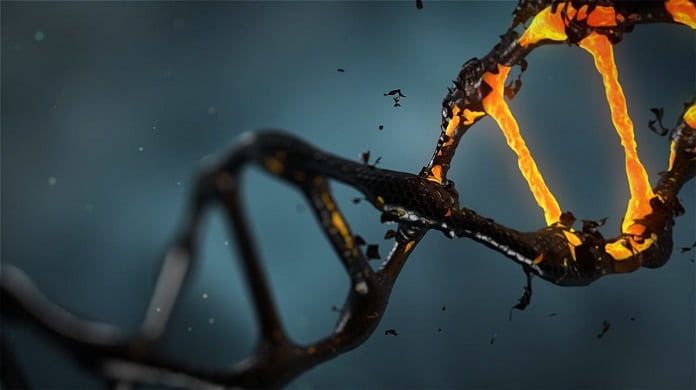 Mobile DNA elements are present in all organisms from bacteria to humans. Accumulating evidence shows that the insertion of mobile DNA into genes disrupts gene expression and is associated with a host of diseases that include cancer, Duchenne’s muscular dystrophy,β-thalassemia, and factor IX hemophilia.

For many years scientists believed that genes were arranged in a strictly linear fashion on chromosomes. Mobile DNA elements, also called transposons or jumping genes, were discovered by Barbara McClintock who observed that a specific segment of DNA in maize would regularly break off from a chromosome and insert at a different site on the same chromosome, affecting the pigmentation pattern of the kernels.1,2

Since this discovery, mobile DNA has been found in a wide variety of organisms.In fact, it is estimated that more than half the human genome is derived from mobile DNA segments.3While most of these DNA elements are no longer mobile, some can still transpose to a different location, affecting gene expression and playing critical roles in mediating a number of diseases. Mobile DNA elements and their role in the development of various diseases was the subject of a recent review published in The New England Journal of Medicine.4 The highlights of this review, especially the association of transposons with various disease conditions, are summarized below.

An important class of transposons is the long, interspersed element 1 (LINE-1).  For example, insertion of these elements into the gene encoding coagulation factor VIII on the X chromosome has been shown to cause hemophilia. Similarly, gene disruptions following the insertion of LINE-1 are known to cause Duchenne’s muscular dystrophy, β-thalassemia, and cancer.

In addition to disrupting gene expression by insertion, transposition can also be accompanied by deletions of large DNA segments at target sites. Examples of this include the deletion in the PDHX gene upon LINE-1 insertion that results in a deficiency of the pyruvate dehydrogenase enzyme complex, and deletions in the NF1 gene that accompany SVA transposon insertion, that result in neurofibromatosis.

Significantly, in addition to mediating disease-causing mutations, DNA recombination events mediated by a class of transposons called Alu elements can generate variations in the number of copies of DNA segments, called copy number variations. Copy numbers may vary among individuals in a population and between populations. Changes in gene copy number contribute to the expansion of gene families and therefore, has a potential role in evolution. This type of genetic diversity is crucial to the long-term survival of a species.

While significant progress has been made over the last three decades in understanding the role of transposable elements in generating genetic diversity and disease, as outlined in the review, only further research can address questions that continue to linger about their function and their roles in cancer development, brain development, and psychiatric disorders.