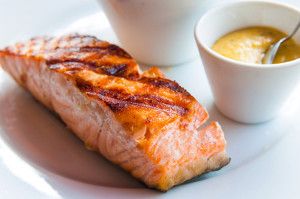 A cross-sectional study published in the Journal of the American Medical Association found that moderate consumption of seafood corresponded to lesser markers of Alzheimer’s disease.

The study analyzed data from the Memory and Aging Project at Rush University Memory Centre. What specifically did they look for in this study? The researchers looked for evidence of dementia-related pathologies (such as Alzheimer’s disease, Lewy bodies) in the brains of participants. They were trying to see if a larger presence of dementia-related pathologies was linked to how much seafood the participants ate on a weekly basis.

What did they find? For carriers of APOE ε4, the largest known genetic risk factor for late-onset Alzheimer’s disease, moderate seafood consumption corresponded to lesser burden of brain Alzheimer’s neuropathology. They also found that those who reported consuming a higher number of seafood meals per week had higher levels of brain mercury, although this was not found to be correlated to brain neuropathology.

While seafood has been reported to help protect against dementia, it has also been found to cause higher levels of brain mercury, which can cause focal degeneration of neurons and central nervous system damage. The results of this study suggest that despite resulting in higher levels of brain mercury, seafood consumption, in moderation, does contribute to protecting against cognitive decline.