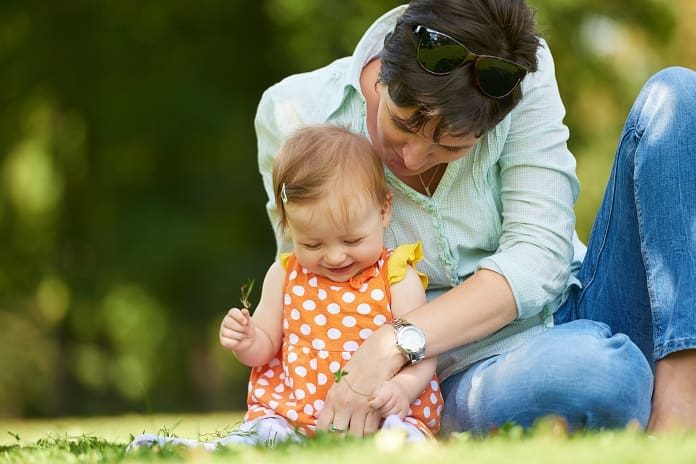 Scientists have investigated the role of oxytocin and its receptors in regulating maternal instincts.

Oxytocin is a hormone or a signaling molecule. It is made and released from the brain in response to different social interactions. Oxytocin is most commonly known for its role in relationships and has been dubbed the ‘love hormone’ because of the role it plays in feeling arousal and helping us form attachments to our partners. It is not surprising then to know that oxytocin is also involved in pregnancy, birth, and lactation.

It is thought that the female brain can be re-wired during pregnancy due to the large hormonal fluctuations that occur during this time. This is what leads to the vast differences in behavior during and after pregnancy. Oxytocin is one hormone that contributes to these changes. It plays a critical role in helping mothers bond with their children directly after birth.  It also seems to regulate maternal behaviors that range from nesting, grooming young, and protecting them from predators, what we typically call maternal instincts.

How does oxytocin regulate behavior?

Oxytocin is made in a part of the brain called the hypothalamus. Specifically, it is made in two places within the hypothalamus, the paraventricular nucleus, and the supraoptic nucleus. The paraventricular nucleus is close to the pituitary gland, so when oxytocin is made here it is released into the rest of the body. When oxytocin is made in the supraoptic nucleus, it stimulates other parts of the brain. Scientists have looked at the differences in the amount of oxytocin produced in males and females of various mammals. They have found that there isn’t a difference in the amount of hormone being made between males and females. How then can oxytocin be regulating social behaviors in women? For a signaling molecule such as hormone to work, there needs to be a protein on the surface of a cell known as a receptor. The receptor recognizes the hormone and tells the cell how to respond to this particular message.

Where are these receptors found?

The medial preoptic area (MPOA) is another part of the hypothalamus, this section of the brain is closely related to regulating maternal behaviors. It is thought that estrogen, can cause the cells in the medial preoptic area to make oxytocin receptors. This may account for the differences in behaviors seen between the sexes, as estrogen is a female hormone.

Researchers ask if there are more oxytocin receptors in female brains

In a recent US study published in Plos One, scientists wanted to know if there were, in fact, more oxytocin receptors in the brains of female mice compared to the brains of male mice. To do this, scientists used genetically engineered mice; these mice have a yellow fluorescent protein attached to their oxytocin receptors. This makes it easy to visualize where the proteins are located when using a microscope. The scientists then looked at six female and eight male virgin mice and examined sections of their brains. They counted all the cells that had the receptors present and found that the females had far more cells with the oxytocin receptors than the males did. This was seen specifically in the medial preoptic area of the brain.

The scientists were interested to know if estrogen would affect the production of this receptor in the female mice. They removed the ovaries from female mice to remove the main source of estrogen from the mice. They found that the number of cells with the oxytocin receptor decreased dramatically when compared with virgin mice that still had ovaries. Finally, the scientist removed the ovaries from mice and then replaced the estrogen by using estradiol replacement therapy. In these mice, the number of cells with the oxytocin receptor was increased compared to the mice that didn’t receive this treatment. However, the increase in the cells was still less than that of the virgin mice that had not undergone surgery.

Although the findings presented in this study appear promising there are some limitations to the study that should be considered. The researchers did not show a direct relationship between estrogen and the oxytocin receptor, they implied a relationship but showed no direct evidence that the two pathways were linked. They didn’t show that estrogen binds to its receptor which turns on the genes responsible for producing the oxytocin receptor. The group also failed to show any behavioral changes in maternal instincts. They did not investigate whether there were more oxytocin receptors in mother mice as opposed to virgin mice. No behavioral studies were done in the mice at all. Additionally, the researchers could have used knock-out mice, mice that do not make the oxytocin receptor at all, to determine if this affected the behavior in the mice but this was not included in their study. The study was only conducted in mice which may make it difficult to interpret the findings of this study. This is because inbred laboratory mice typically show spontaneous maternal behavior in contrast to mice that are not bred in the lab. This may mean that the control of maternal behavior in lab mice may not be regulated as strongly by pregnancy hormones. Finally, it is difficult to extend the findings of this study beyond that of mice. This is because the oxytocin receptor production is brain region-specific as well as species-specific. In rats, for instance, males have more oxytocin receptors than females.

Despite these challenges, this study can provide some clues as to what regulates the difference in social behaviors between males and females. This is critical for understanding social disorders such as maternal neglect, schizophrenia, autism, depression, and borderline personality disorder. Oxytocin has been implicated in all of these disorders and they all have sex biases in prevalence. Understanding maternal behaviors may provide the foundations for understanding and eventually treating these psychiatric disorders.