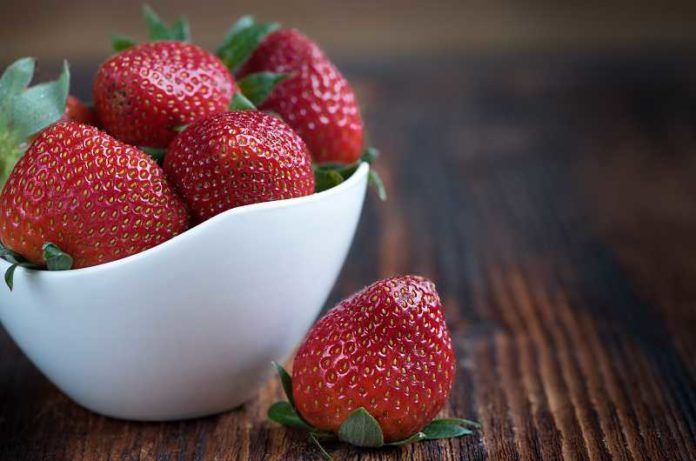 A study found that polyphenols from strawberries and cranberries improve insulin sensitivity. These findings suggest that incorporation of these fruits in the diet may have long-term beneficial effects, especially for obese insulin-resistant patients.

Globally, the International Diabetes Foundation projects that 592 million people will be affected by type 2 diabetes by 2035. It is hypothesized that this increase is due to a higher prevalence of obesity and sedentary lifestyles. In obese individuals, pro-inflammatory molecules produced in the fat tissue eventually lead to insulin resistance. To maintain normal glucose levels, cells in the pancreas must compensate for insulin resistance, which leads to exhaustion of insulin secretion and the impairment of glucose tolerance. These events lead to type 2 diabetes. Recent evidence suggests that consumption of berries may reduce the incidence of type 2 diabetes. Similarly, strawberries and cranberries were reported to lower cardio-metabolic risk and improve metabolic syndromes in patients.  Strawberries and cranberries are rich in polyphenols, which may improve glucose metabolism and glucose uptake in insulin-sensitive tissues by reducing inflammation. Previous studies have investigated the effects of strawberries on metabolic syndromes. However, none of these studies used a stringent method for determining insulin sensitivity.

Using a stringent method for determining insulin sensitivity called hyperinsulinaemic-euglycemic clamp (HEC), researchers from Laval University determined the effects of strawberry and cranberry polyphenols (SCP) on insulin sensitivity. Published in The British Journal of Nutrition, this novel study was conducted using a randomized, double-blind, controlled, parallel method to determine changes in insulin sensitivity after 6 weeks of SCP consumption versus control beverage. The researchers assessed changes in glucose tolerance, insulin secretion, plasma lipids, markers of inflammation and plasma phenolic components. The study analyzed 46 overweight and insulin-resistant participants, aged 40 to 70 years. The researchers randomized participants into SCP or control beverage groups. SCP were incorporated into a blended beverage. Taste and appearance of both SCP and control beverages were controlled for.

Researchers found that insulin sensitivity (as measured by HEC) before and after the 6-week SCP consumption increased by 14% in the SCP versus the control group.  C-peptide response, a metric for glucose secretion, did not change for up to 30 minutes in the glucose tolerance test in the SCP group. While the control beverage group showed an increase C-peptide response. In addition, characterization of phenolic content showed that p-coumaric acid, m-coumaric acid, ferulic acid, and hydroxyhippuric acid were increased in the SCP group versus control. Moreover, there was a negative correlation between p-coumaric acid and C-peptide response. There were no significant differences observed in lipid profile or inflammatory markers between the two groups.

The researchers concluded that consumption of SCP over 6 weeks improved insulin sensitivity. These findings were in agreement with previous studies, in that dietary supplementation with berries can improve insulin sensitivity of obese, non-diabetic, insulin-resistant patients. The findings, however, were not associated with a decrease in markers of cardiovascular risk. Controlled-dose trials and long-term studies are required to ascertain such effects. Finally, the findings of the study provide evidence that consumption of strawberries and cranberries may help obese patients who are at risk of developing type 2 diabetes.