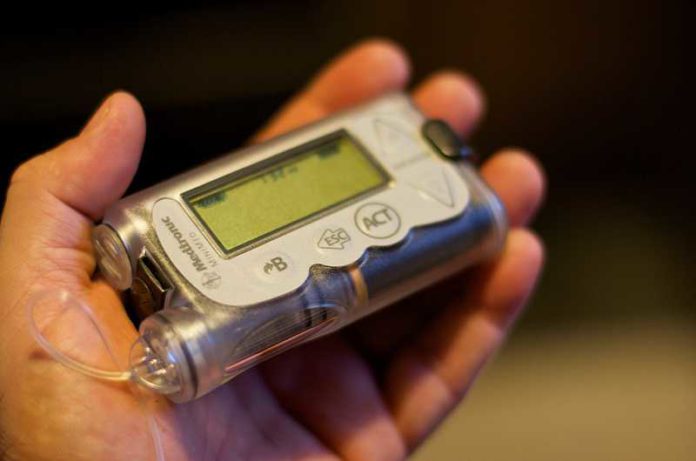 Type 1 diabetes is a serious medical condition that requires lifelong subcutaneous injections of insulin hormones to keep blood glucose levels in check. A consortium of UK researchers, the Repose study group, recently investigated the medical and psychological benefits associated with insulin pumps for injecting insulin over standard manual injection, and their results call into question the use of this technology.

Type 1 diabetes is a metabolic disease caused by hyposecretion of insulin, a peptide hormone secreted by pancreatic cells required for blood glucose uptake into cells. Unless treated, diabetes can have several detrimental consequences on patients’ health ranging from eye damage to foot amputation. Thus, these patients rely on subcutaneous injections of synthetic insulin to maintain blood glucose homeostasis, which is especially crucial after mealtime.

Although insulin injections have proven their effectiveness for treating type 1 diabetes, treatment efficacy heavily relies on dosage strength, timing, as well as on the patient’s own rigorous organization and self-motivation. Collectively, these requirements have a certain negative impact on patients’ quality of life (QOL). In part for these reasons, automatic insulin pumps have been commercialized and enable injection of maintenance insulin doses between meals and stronger doses after meals, which are thought to improve both patients’ QOL as well as diabetes control. For the latter point, however, it remains unclear whether this better control of blood glucose levels observed among insulin pump users is a direct or indirect consequence of their usage. Indeed, it has been proposed that a substantial portion of this benefit might be explained by the extensive training that these patients receive to properly use the instrument compared to patients using manual injection, who receive less attention. Thus, it remains uncertain whether systematically implementing insulin pumps for treating type 1 diabetes might be more effective than providing additional training to patients who use manual injections.

To address this question, a consortium of UK researchers, called the Repose study group, comparatively assessed the relative efficacy of insulin pumps and manual injections in controlling blood glucose levels among type 1 diabetes patients. A total of 248 patients who did not show any preference for either treatment procedures were enrolled for this novel study, published in BMJ. 128 of them were assigned to a group who used insulin pumps, while 120 used manual injections. Importantly, unlike other studies previously performed, both groups followed a five-day educational program to improve their use of insulin therapy. This allowed addressing concerns previously raised by this distinguishing feature, which might have played in favour of insulin pump users in other studies. Glycated haemoglobin (HbA1c) levels were used as a read-out of glucose levels as unlike direct glucose measurements, it allows to assess the long-term trend in glucose levels owing to the four months life expectancy of red blood cells. This, as well as several other secondary outcomes including QOL, hypoglycaemic and diabetic ketoacidosis episodes, were assessed after six, 12 and 24 months.

Overall, their results call into question the benefits of insulin pumps. First, although HbA1c levels were slightly more decreased after 24 months among insulin pump users, the difference is deemed insufficient to impart meaningful medical benefits. Second, three times more insulin pump users were affected by ketoacidosis, although the absolute proportion of these adverse events remained relatively low in both groups. Finally, although the vast majority of QOL parameters argued in favour of insulin pump usage, the relative impacts were deemed insufficient to meaningfully improve overall patients’ QOL. All other secondary outcome parameters analyzed were only marginally affected in either way for the two groups.

In summary, this study calls into question the use of insulin pumps for treating type 1 diabetes. However, one experimental concern is that users of insulin pumps showed higher HbA1c levels before beginning insulin treatment. This raises questions about the impact of this difference on the conclusions, although it appears unlikely to have a profound consequence. Second, although the individual contributions of each QOL parameters assessed may appear marginal, their collective psychological benefits may nonetheless significantly improve patients’ QOL, which might argue in favour of insulin pumps. Thus, a health economics and outcome study appears necessary to verify if these seemingly mild psychological and medical benefits may overcome the economic cost associated with the use of this instrument.