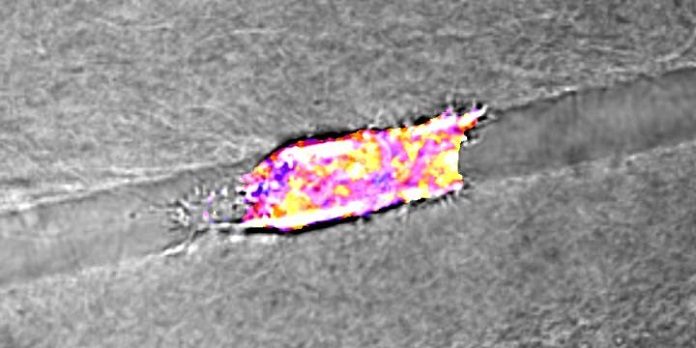 Scientists investigate the mechanics of how cancer cells move through the body, demonstrating the critical role of energy expenditure during metastasis.

Metastasis is a stage of cancer where cells from the primary tumor have acquired the ability to spread to other parts of the body and form new growths. This is a particularly deadly development as most treatments fail at this stage of cancer progression. A lot has to happen to a cell to allow it to metastasize. First, it has to develop the ability to move away from the tumor. The cells then enter the bloodstream or lymphatic system and have to survive transit through the circulatory system. Finally, the cells maneuver their way out of the bloodstream and grow in a completely different environment. Cells don’t exist in isolation they are surrounded by fluids, proteins, fats, and enzymes as well as many other molecules. Collectively this three-dimensional network is called the extracellular matrix. Cancer cells have to be able to move through this matrix to metastasize. The pivotal step in this entire process is the cells’ ability to move and migrate.

How do cancer cells know where to go?

In a recent US study published in Nature Communications, researchers wanted to know how cancer cells moved through the extracellular matrix. They were specifically interested in understanding how the cells made directional choices. The scientists created Y-shaped three-dimensional collagen microtracks that had varying width size in the branched arms. The team was interested in analyzing spatial confinement, the interaction between the cell and matrix, and cell motility. It turns out that cancer cells are quite lazy and follow the path of least resistance. The cells would actively investigate their surrounding matrix and 70% of the cells would preferentially travel down the wider branch. The scientists speculated this was because travelling down a narrow tunnel would require more energy, this is because the cell would have to change its shape to squeeze through the tunnel or it would have to deform the tunnel to pass through, both processes require energy expenditure. Think of it like trying to get through a dense jungle, you either have to climb over the plants and boulders in the way or you have to use a machete to cut your way through, both approaches will take energy to work. The best option would be to walk on the pathway through the jungle. The researchers went on to investigate the energy consumption of cells travelling through varying widths microtracks. They found that the cells that were more confined consumed more glucose and had increased energy production. Professor Cynthia Reinhart-King, principal investigator for this study, stated in a press release “These cells are lazy. They want to move, but they will find the easiest way to do it,”

It takes more energy to move in tight spaces

The scientists then designed a computational model to predict where the cancer cells would move. Their model predicted that cells would move in such a way as to minimize energy expenditure. The model predicted that stiffer cells or cells within a stiff extracellular matrix would not be likely to move down narrow paths. The team tested their model by manipulating the stiffness of cells through chemical treatments. They found that as they increased the stiffness of the cell it had reduced migration into narrow paths they also showed that the cells used higher amounts of energy to move. They then went on to stiffen the microtracks (or the extracellular matrix) and found that cells were less likely to travel down stiffer tunnels. It also took the cells longer to travel through these stiff pathways.  The team was able to show that there was a definite increase in the amount of work required to move in confined spaces.

This study demonstrates that cell metabolism is a critical part of metastasis. This type of study provided fundamental information for the development of novel treatments for metastatic disease. There were a few limitations to this investigation that should be considered. The group only studied a single breast epithelial cancer cell line in this investigation. Cancer cells are known to be more malleable than their healthy counterparts. It would have been interesting to compare their observations to a healthy control to determine if the effect was specific to cancer cells. It would have also been informative if a panel of cancer cell lines was tested to determine if these observations were similar in both aggressive and benign tumor types.  The cells were grown in Petri-dishes. The model system used is simplified relative to the complexity of the extracellular matrix, therefore, it may be difficult to know if these observations are relevant to animals and humans.